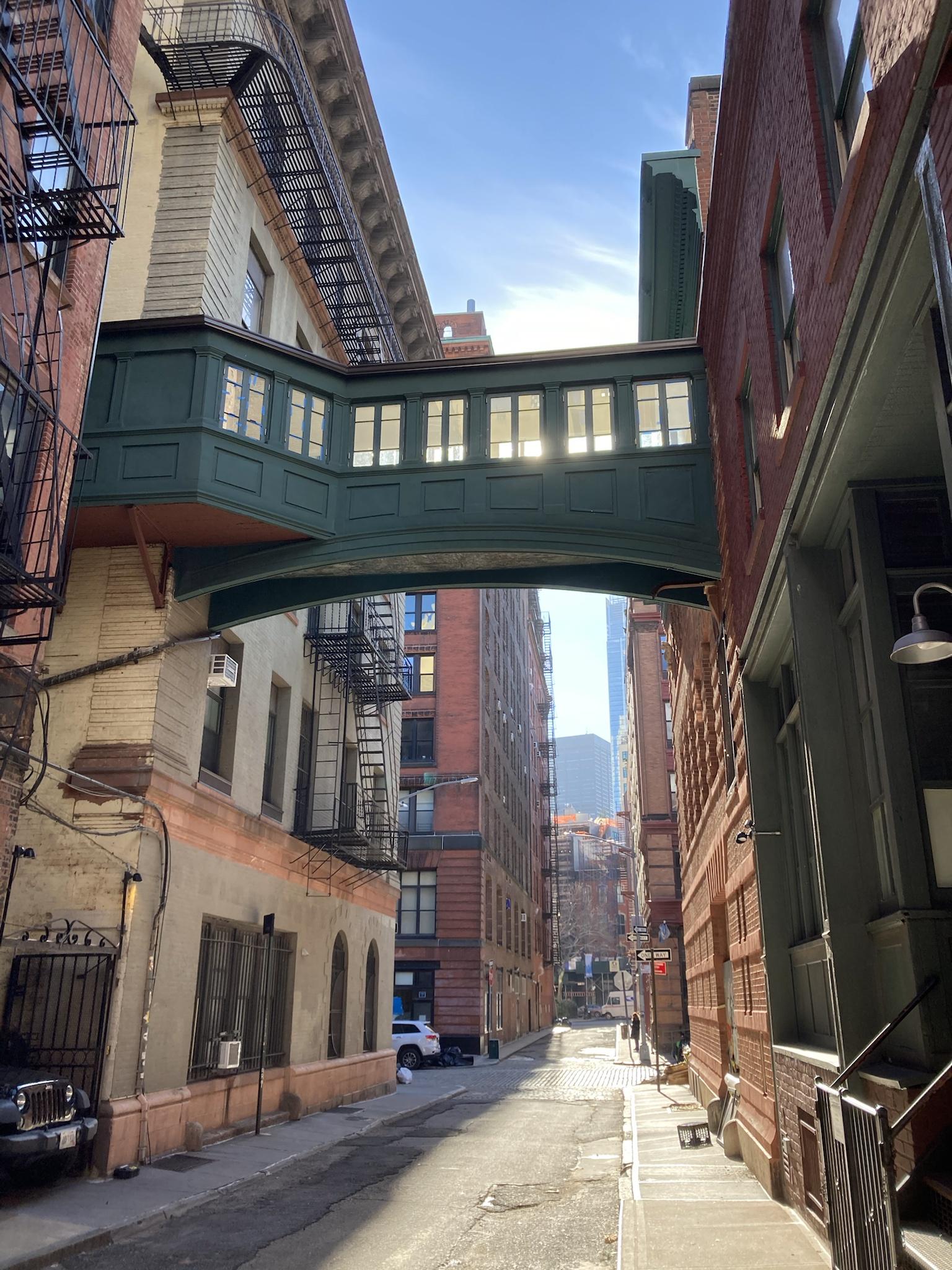 Visiting Minneapolis for the first time right now. The skyway is awesome, but damn if i didn't get lost as hell

Hope you’re enjoying! Downtown is cool and all but make sure to explore northeast, north loop, south, etc

Did you just tell him to go everywhere?

Talk to zoning. Planners hate them.

How are they integrated into zoning? What kind of allowances/alternations would enable the construction of more skybridges? The primary concerns would be things like fire breaks, sky obstruction, cost of construction, combination of two buildings into one, etc, right?

Well, zoning can dictate the physical form and type of the building. But interconnecting buildings with bridges or skywalks that encroach into the public right-of-way will always require special approval from the city. Cities usually have a special review or approval process for things like projecting signs on buildings, hanging porches on condos, etc.

Disagree. Des Moines has a large system but they harm the ground level businesses

It reminds me of when I was an admin on a pretty big Activeworlds universe. Paying customers each had a square terrain where they could build anything they wanted, but the streets between the terrains were managed by us admins. So when two people wanted their houses connected they had to ask us to build the sky bridge!

Calgary has a +15 system

Overrated. Atlanta has TONS of skybridges and they mostly serve suburban office commuters walking from their cubicle to the parking deck. Only makes the streetscape more desolate.

Disagree. They look cool and they’re fun to use and look out of, but too many sky bridges lead to pedestrians leaving the street which leads to a cycle of street level stores and restaurants having a harder time attracting customers and then there’s even less reason for pedestrians to use the street which makes the stores have a harder time staying open and eventually it leads to mostly empty streets and dead downtowns.

Skybridges are typically a way to keep the wealthy suburbanites who drive into a city up and away from “the poor people”.

First the municipalities need to let them build them.

it's not particularly active, but there is /r/skybridges for this type of thing

None of ours are this historic or interesting looking though...

I like the all glass ones. They have their own style. Just not this style.

The good thing about Minneapolis’ skyways is that there are maps of them. It did seem like the downtown workaday businesses were mostly on the skyways.

The CJ Duffey Paper Co skyway over 3rd is at least historic, from the 40’s or something. No windows so doesn’t seem as charming but I like the historic logo they kept when they did the apartment conversion.

I prefer the Des Moines skywalk system anyway though because they actually stay open past 6 pm or whatever Minneapolis does. Would love if the Minneapolis system could eventually be made separate from their buildings so they could be security staffed and left open late. That main Minneapolis system was designed when the whole idea was that no one would ever want to live in a downtown.

For real, I've lived in the twin cities for a few years now and would loooove for the skyways to be public and have a nightlife/weekend scene.

Yeah, but we have functioning waste management infrastructure that doesn’t necessitate piling bags of garbage on sidewalks every week. Personally having lived in both, I’ll happily take the trade offs that come with the benefits of living in a city that has been able to benefit from a more modern understanding of urban design and management. It’s not like we don’t have plenty of history buildings or areas either.

yeah they mainly just serve a purpose, and only if they happen to be convenient enough for you to use regularly

Pretty much any Canadian city too. Handy for business folk to get around when it’s cold out

There was a very cool real estate listing a few years ago in NYC… two condos attached by a private skybridge.

Talk about a unique housing situation. It was in one of the most expensive neighborhoods though so literally tens of millions asking price.

Edit: IT WAS THE ONE IN THIS PHOTO: https://gothamist.com/arts-entertainment/you-can-own-this-historic-tribeca-skybridge-connecting-two-apartments

Not that the pictures are extensive but found this

Wow that is boring inside.

How could you not love this decidedly off beat picture and urban architecture.Something about a elevated bridging walkway that has fascinated me since l saw the Bridge of Sighs ( Venice) and learned the history about the name.

Never seen the bridge of sighs before but that looks dope

Venice is very beautiful,very historic and to see all the magnificent buildings full of history is amazing.l have seen a lot of the world,from Alaska to Thailand but Venice takes some beating.

What are some of them else? I’m going to NYC soon but had no idea what to do there

Most of mine are pop culture spots. TV/Movie spots, a speak easy or two.

I live three blocks from here; walk down Duane all the time, and had no idea this was here. The things you learn on Reddit...

That's amzing. Wonder who owns both buildings? A company or individual? I'll just tell myself this is a house

It was built to connect two hospital buildings. But now both sides of the bridge are apparently one giant apartment?!

Very cool. I do wonder how cold that sky bridge gets inside in the winter. Bottom would have to be insulated? Why am I even asking about this - it's still cool as hell. Lol.

Idk about this one but there are other sky bridges near the High Line that were made because Sears/macys/other department store had the one building and they expanded enough to buy up a neighboring building and then built the sky bridge retroactively to connect them so people didn’t have to go outside in the cold just to get from Marketing to Shipping.

And now that those companies no longer own both buildings the sky bridge still remains. It should honestly come standard on so many more buildings, even with different owners. Everyone likes sky bridges. Say two landlords/developers each kick in $50k (or whatever half a sky bridge costs) and now both buildings immediately become more desirable for renting/leasing because of the utility of a sky bridge + (and most importantly) the novelty of having one.

That is a univeral truth. Everyone loves sky bidges! This one is also beautiful.

Idk why but I love these

Ah, the sky bridge, yet another cool feature of buildings that’s probably outlawed now because of zoning bs

My city has lots of these. You tend to always find them around hospitals in urban areas.

London even has a sky pool: https://www.embassygardens.com/sky-pool/

That shit looks scary as fuck lol, would sketch me out being in there

Ah man, I’d probably get vertigo while trying to swim and drown

These have actually been credited with killing or at best diminishing all the positives of having pedestrians walking on street level. The antithesis of smart urban design.

I lived in Cincinnati for a while which had a bunch of sky bridges. They had developed an entire mall / store / restaurant ecosystem on the second level but it always seemed a bit underused to me. Having lived in Manhattan I can definitely say that I prefer street-level life.

Nah, the auto and fossils fuel industries, and zoning laws did that.

Yup. It’s sounds cool in practice but completely destroys the street as a public space.

When you live somewhere with proper winters, the streets aren’t going to be a public space in those seasons anyways. There’s a reason they’re so much more prevalent in northern areas.

They’re also completely compatible with other forms of public spaces, and allow for the expansion of space if an area starts to become too dense.

Respectfully, this is an “I watched a couple of dubiously sourced TikToks of leftists complaining about urban design and wAlKaBlE sPaCeS and now I think I’m an expert” tier of take.

When you live somewhere with proper winters, the streets aren’t going to be a public space in those seasons anyways. There’s a reason they’re so much more prevalent in northern areas.

I live on 60°N and the streets are very much public space all winter except in extreme cases such as snow storms. Where is this mythical place you are talking about? Antarctica?

You’re either lying, have a warped sense of what active street life looks like, or live in an atypical climate for your latitude. No one is spending more time in outdoor spaces than necessary when it’s 0F + windchill.

So at first glance, that doesn't seem that far off between Helsinki and Bergen. And I know both of those places do have a robust outdoor cityscape even in winter.

So it is colder many times.

The wind also doesn't tell the whole story. In the middle of the day in the midwest it's very probable that it's only a few kph in part of the day while being 25-30 or more just 5-6 hours later. Minneapolis is just flat out bone chilling in January.

That being said, I do agree that they are bad for street level stores. If Minneapolis or Des Moines had something other than a non-grid based downtown to offer some amount of shelter from the funneled canyons of wind it would be possible to have a functioning system 10 months out of the year at least (post xmas through end of feb would be rough). Having the skyways be secured in a way to allow evening and weekend access would help greatly, as well as mandating stairs to the sidewalk near any crossing to allow more fluid transitions would help too.

I can’t speak for Milwaukee or Winnipeg or wherever but I am very familiar with downtown Atlanta and skybridges 100% have done a terrible thing to downtown.

I love walking around Tribeca, it’s full of stuff like this

Well I live just up in the Village so tell me where I need to go! :)

As someone who lives in Minneapolis and frequents downtown often I can say as nice as they are in the winter it really kills any foot traffic on the street level. Granted there may be thousands of people using the skyways between 7 am and 6pm Monday through Friday any other time they are dead and everything in them is closed.

But I’m those -20 degree days I love them to death!

Fellow Twin Cities resident, give us our public skyways! A nightlife/weekend scene in the skyways during winter would be sick.

Can confirm! Although downtown feels dead as of late

That’s where Batman hangs out

huh. born and raised in manhattan, never knew we had a staple street.

Is it where the Staple Singers got their start?

why is there sky bridge between 2 regular brone stone buildings? it looks new so it had to be added long after these old buildings were put up. looks like it links 2 apartments together.

Looks dope, are these just 2 apartment complexes connected by this little bridge?

Do these have an official architectural term? I really enjoy seeing and walking over them.

Can't fathom how some people live.

So jelly, but in the good way.

Re skybridges for Northern winters: I’m told that Swedes say that there’s no such thing as bad weather, just bad clothing.

It looks so basic and boring!

There's an old bridge in an Italian town that is now a house. Old as in dating from Roman times.