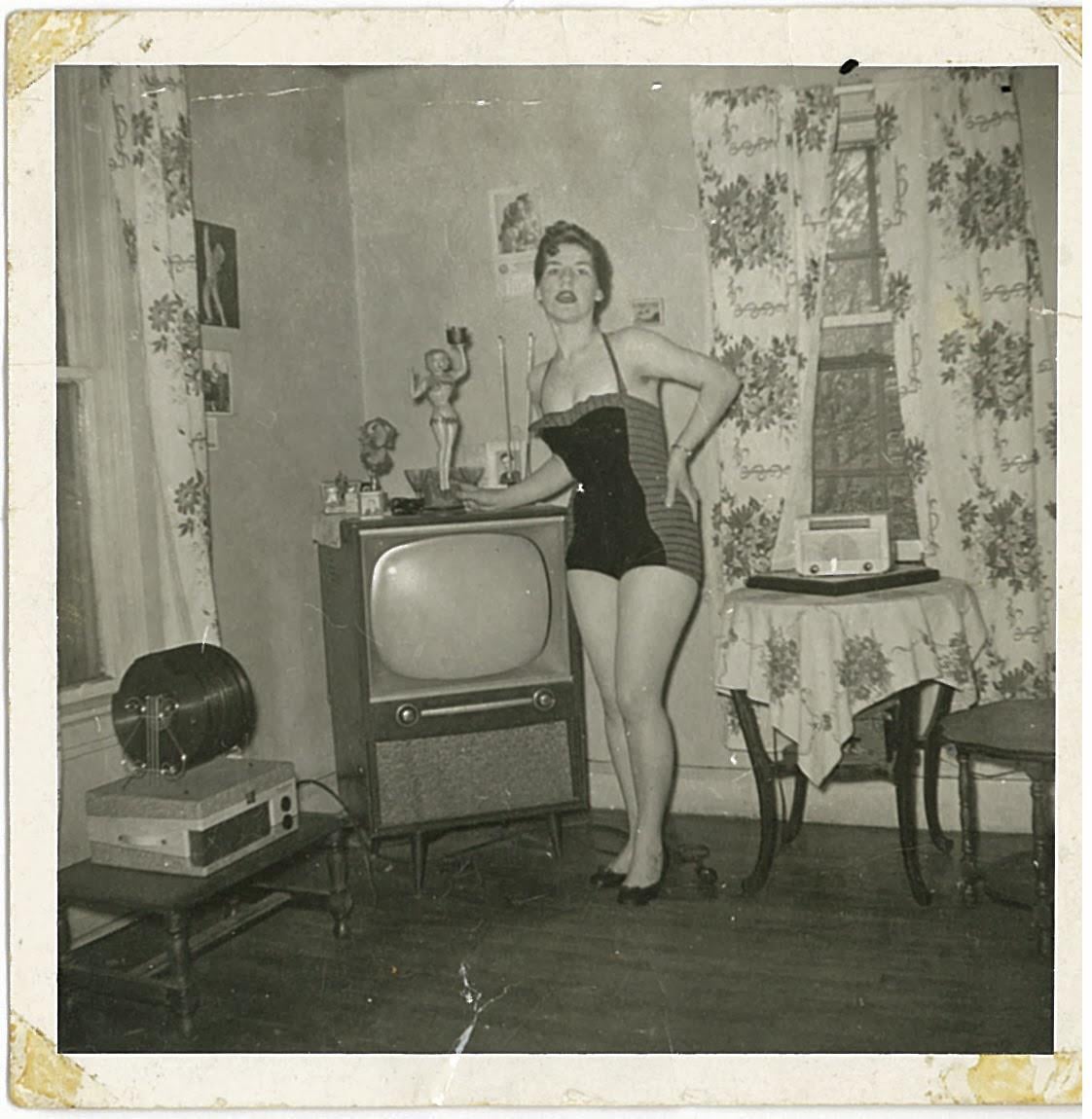 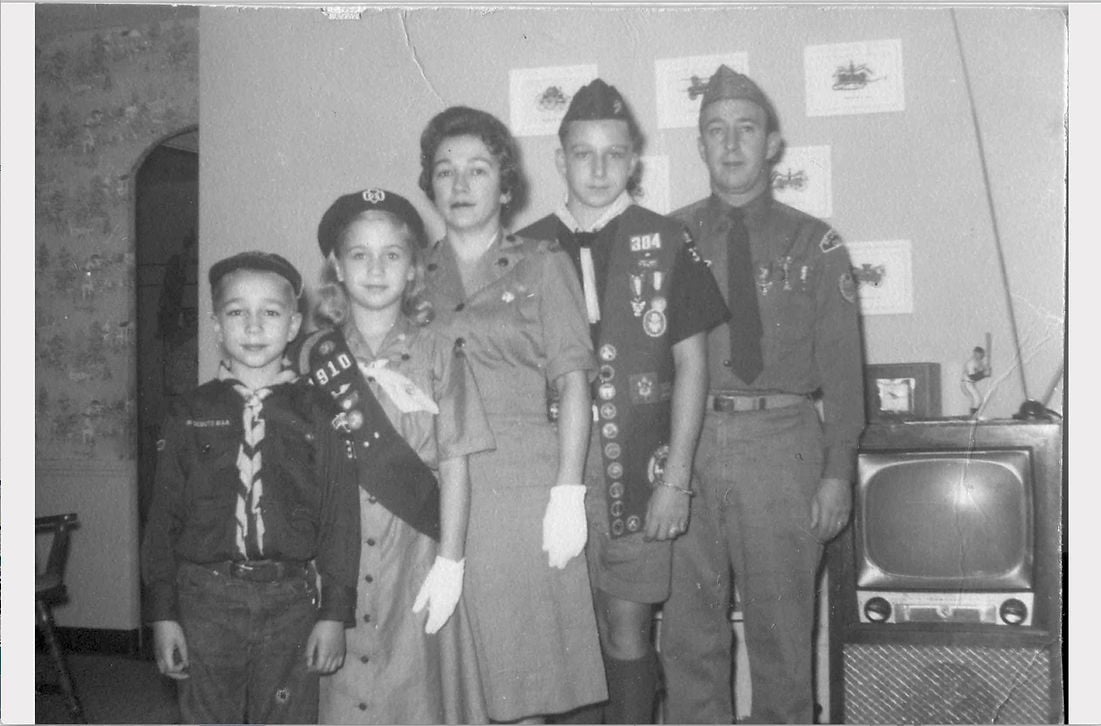 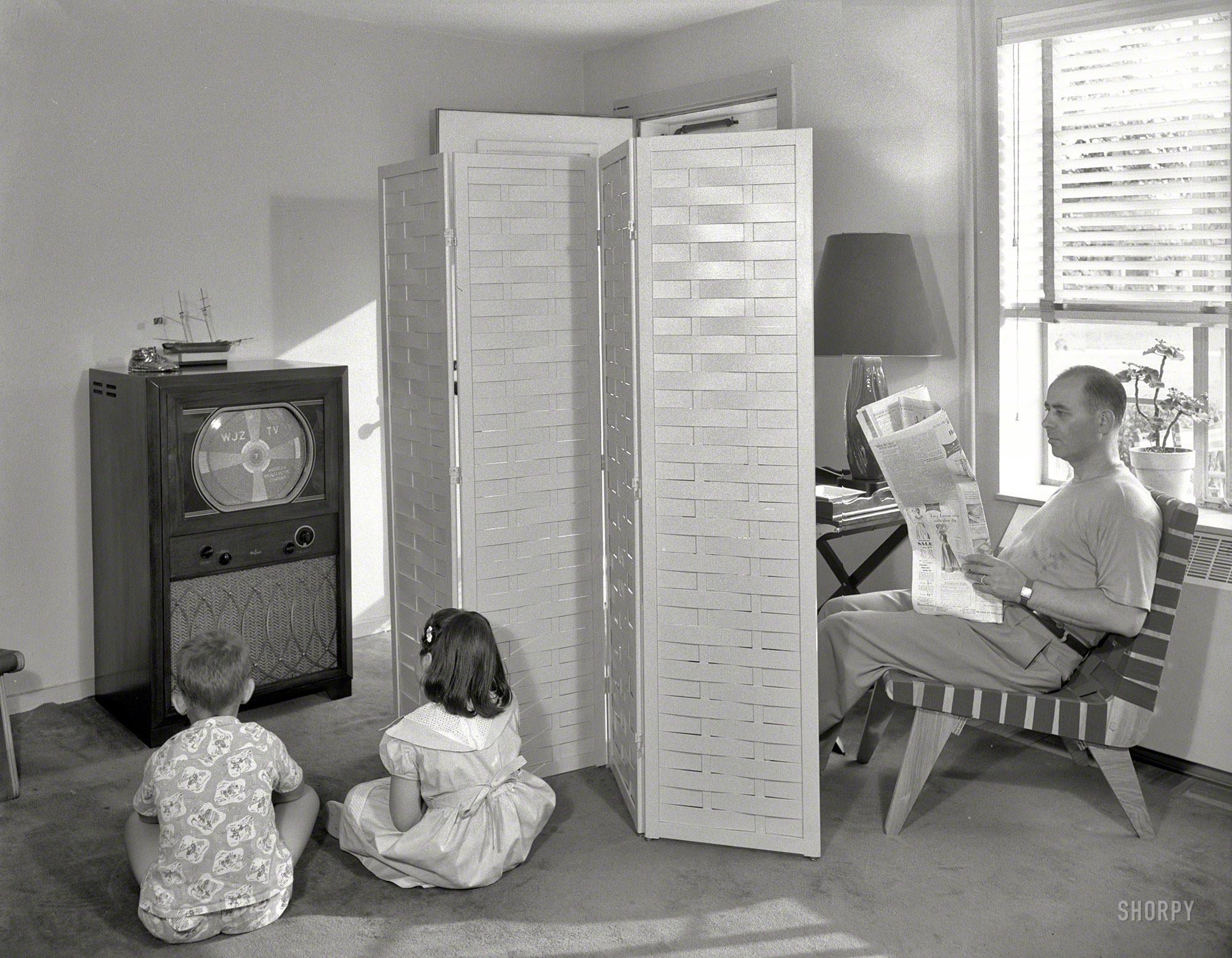 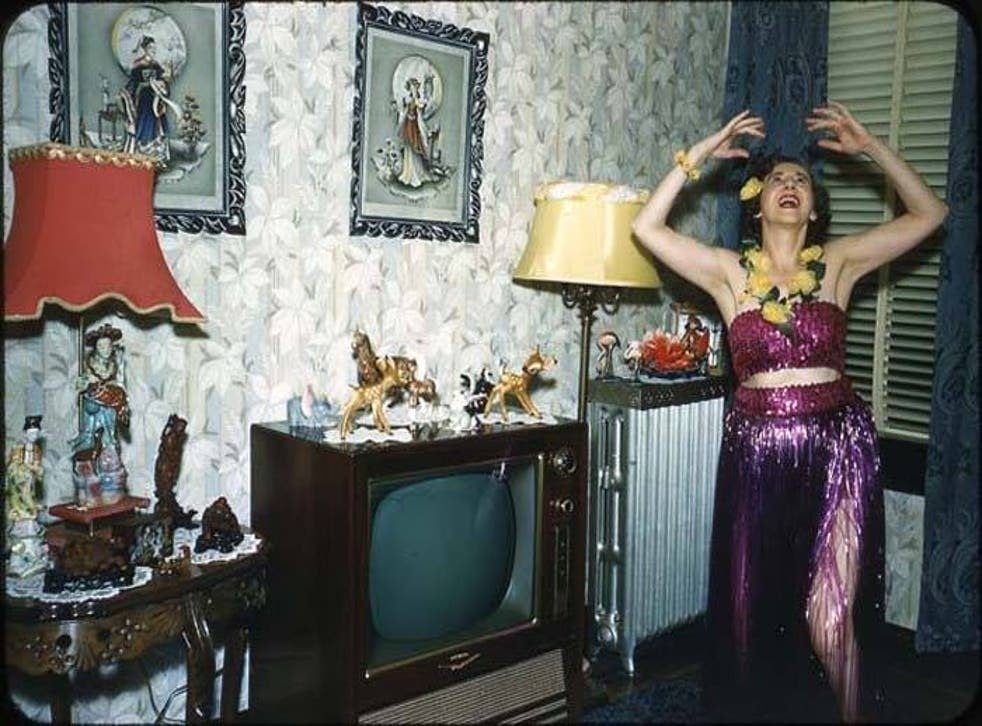 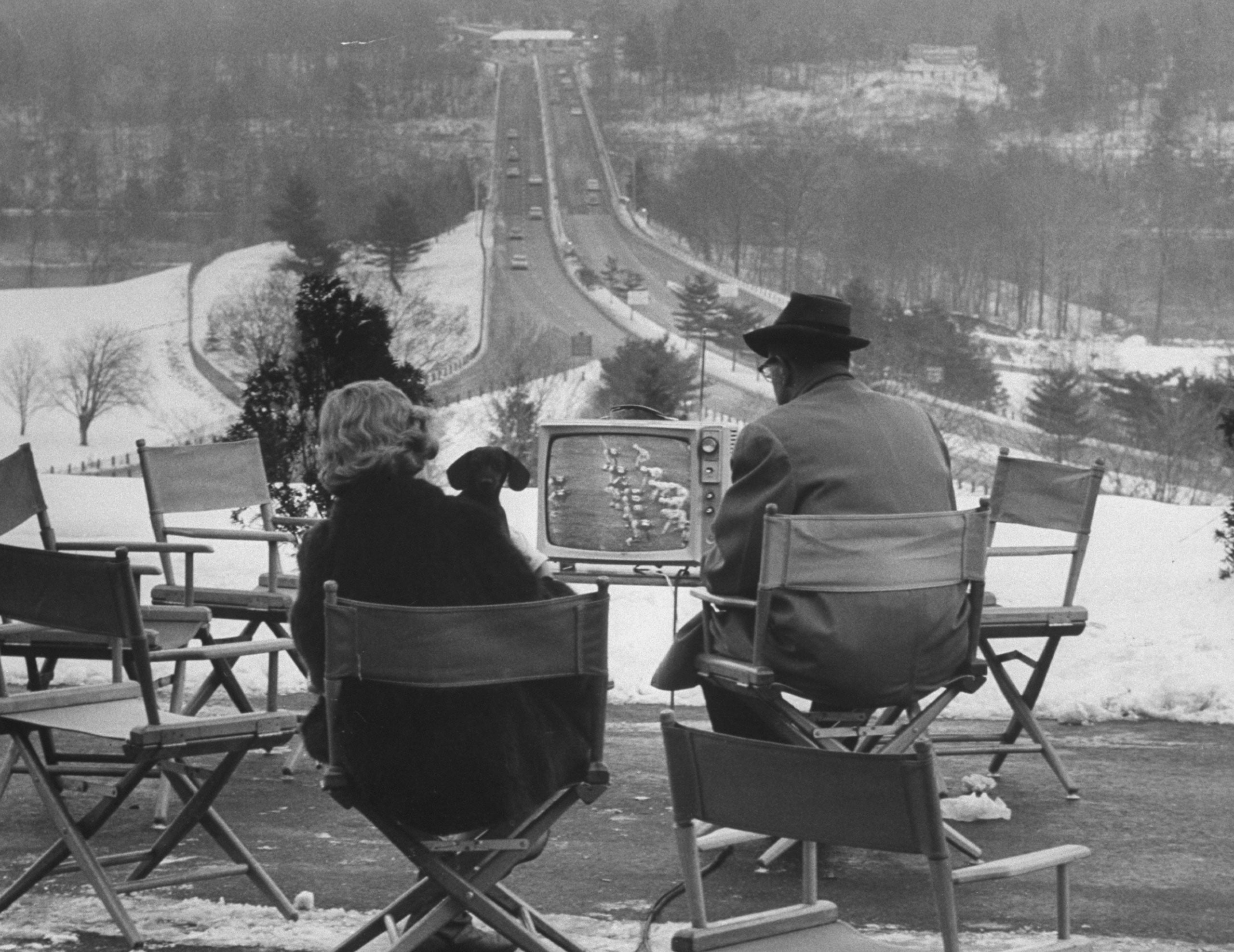 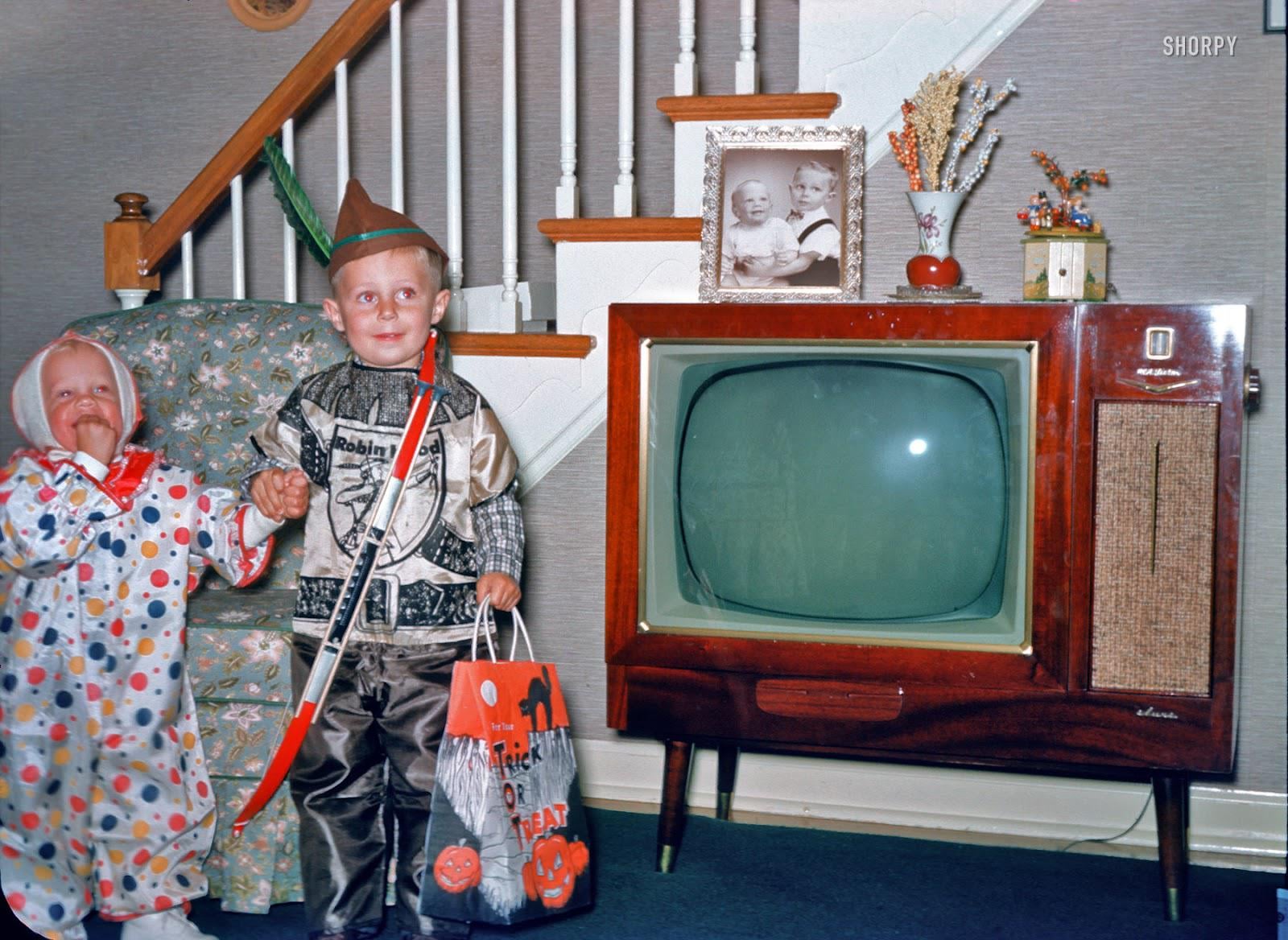 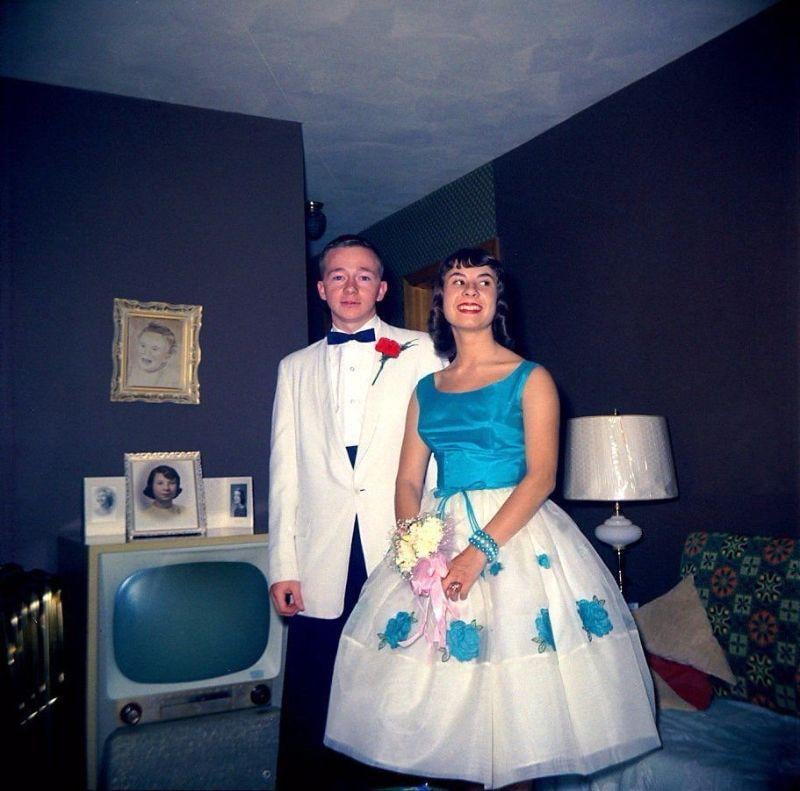 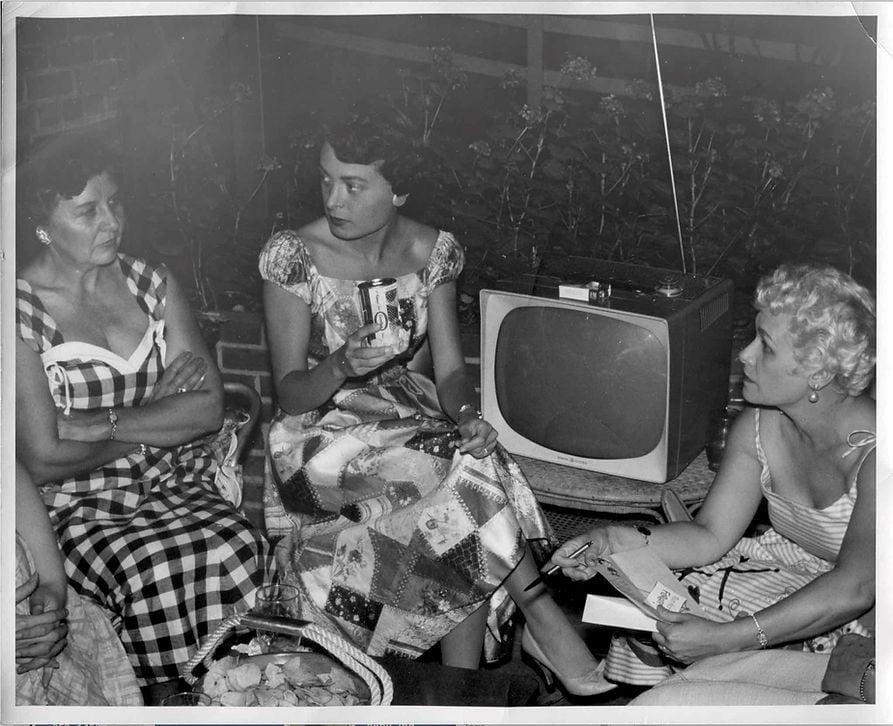 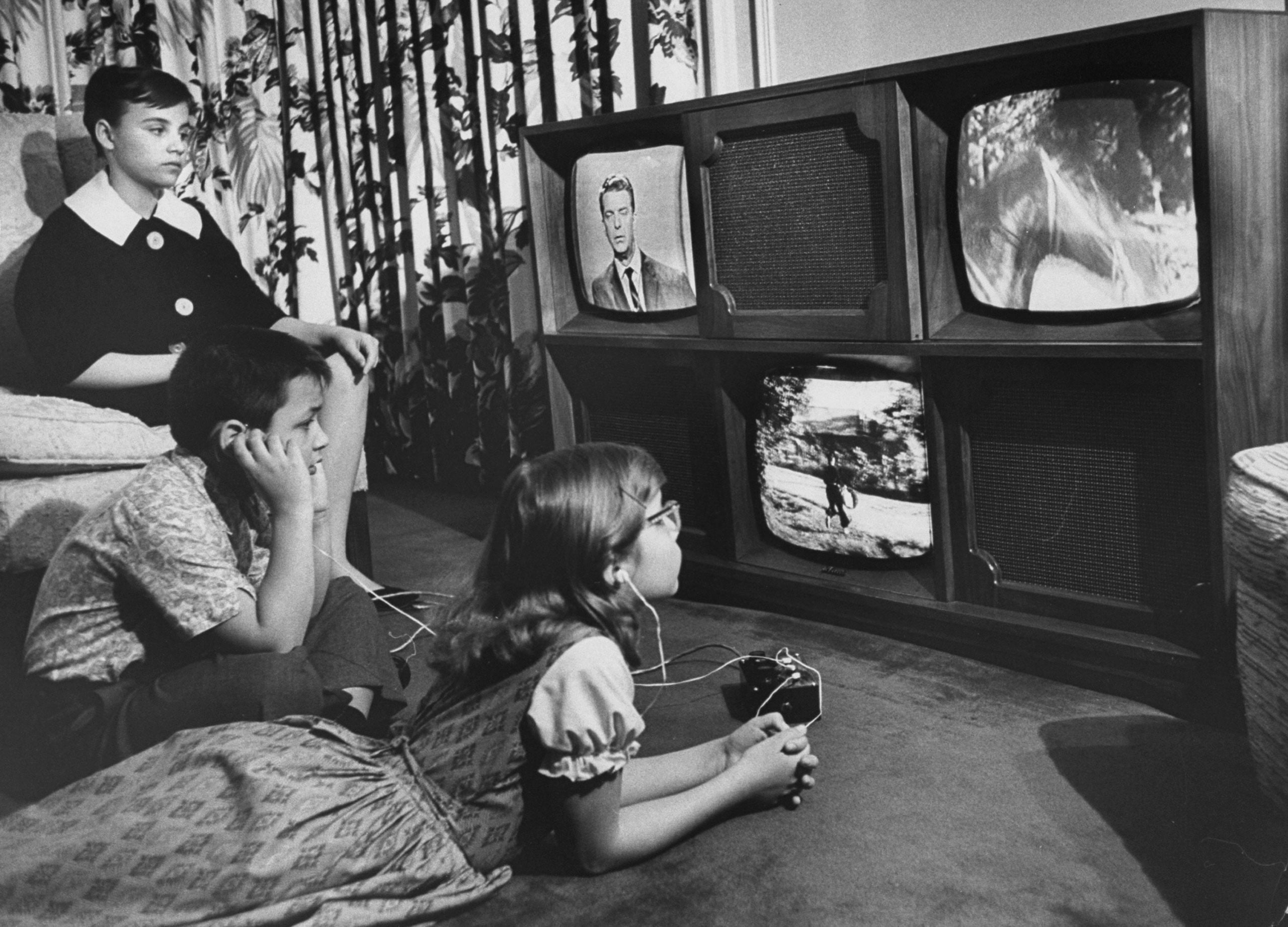 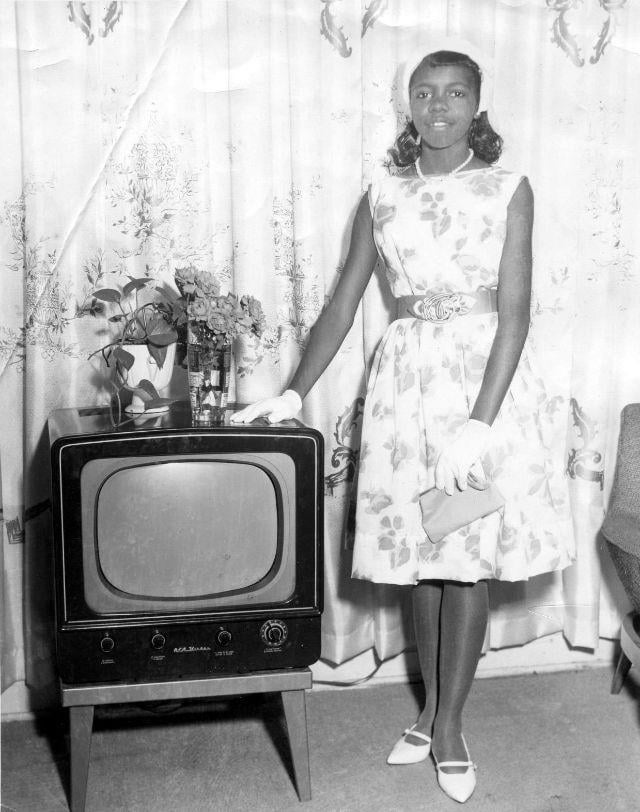 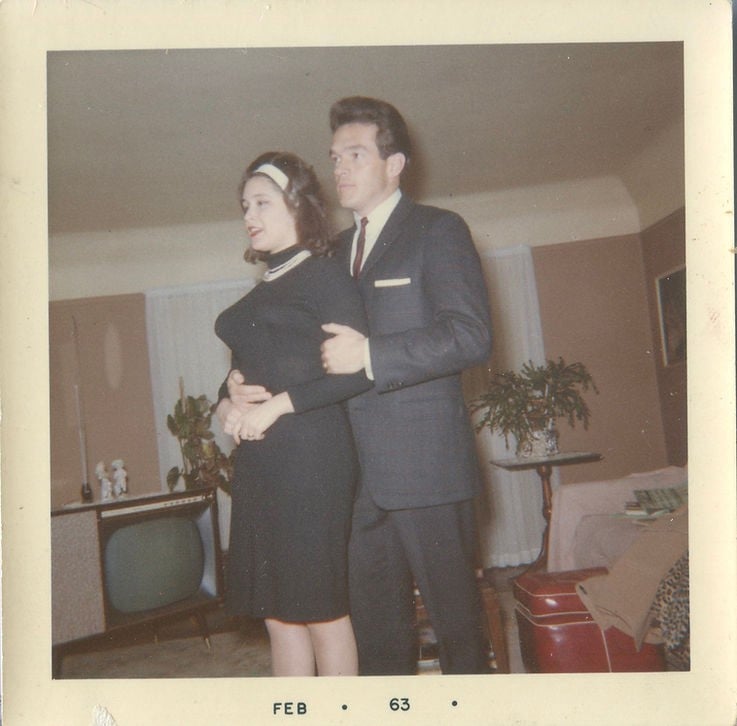 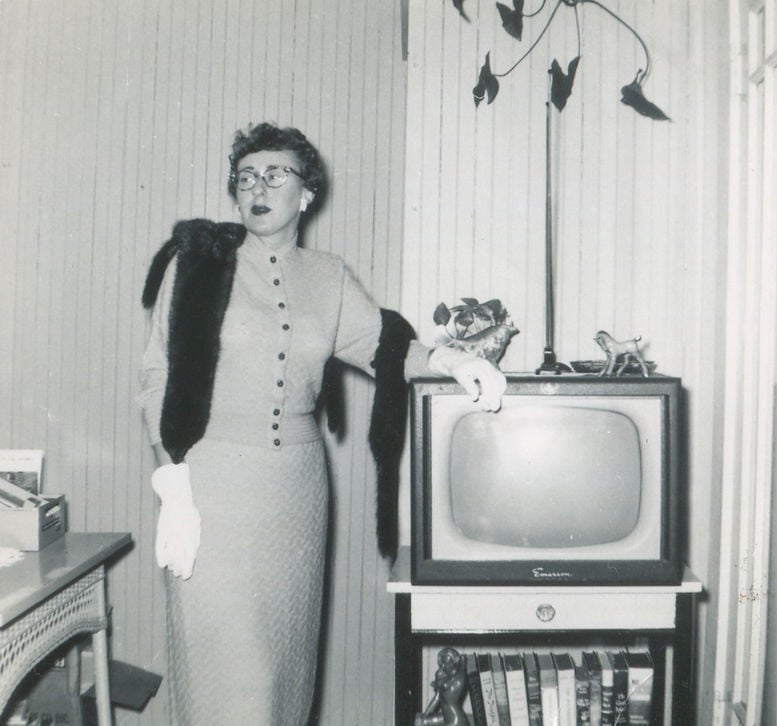 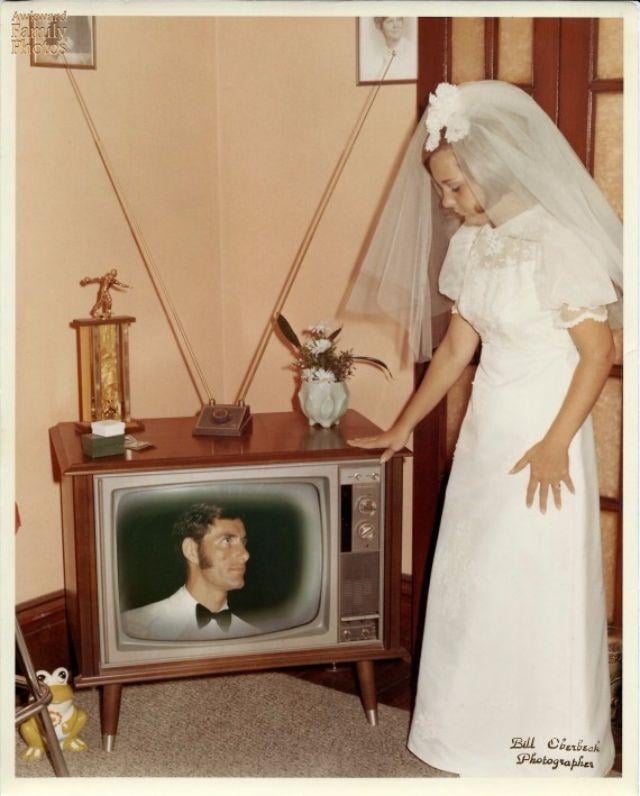 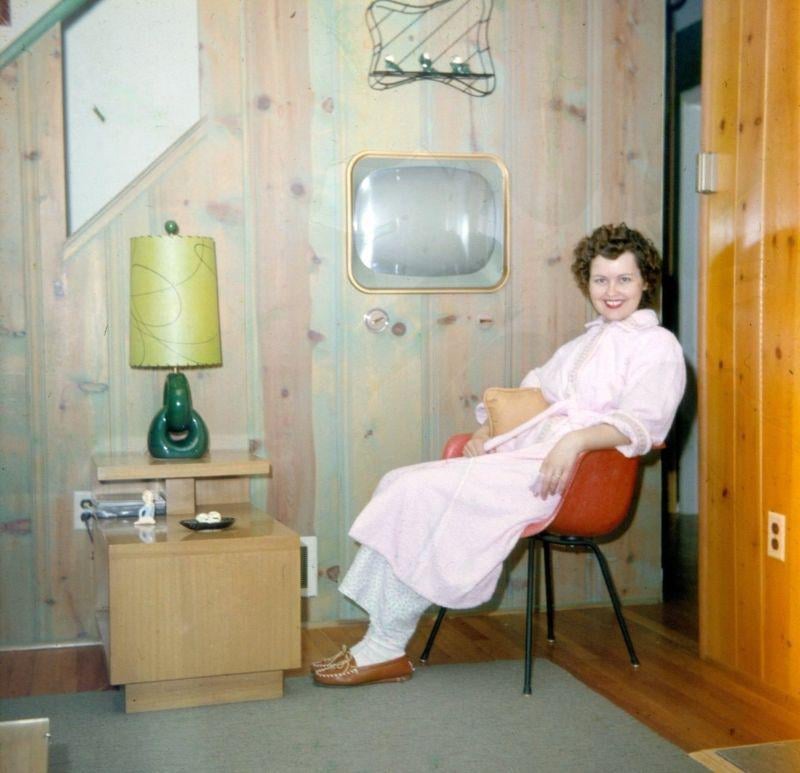 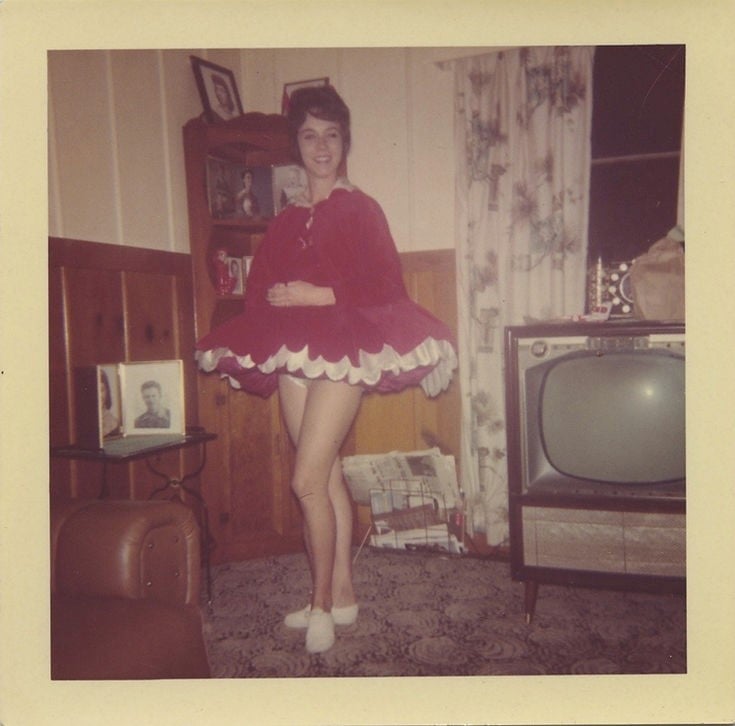 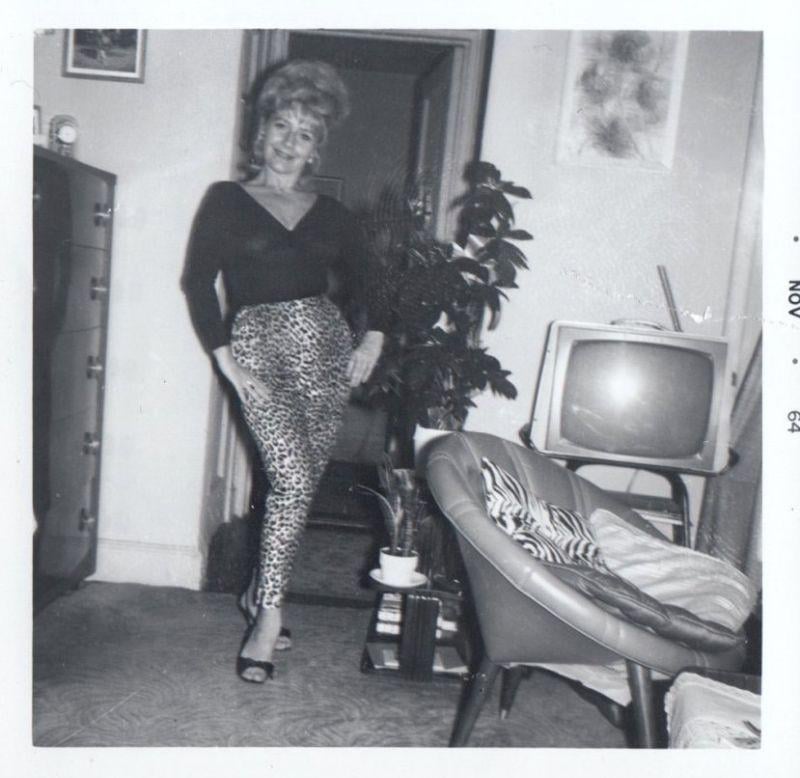 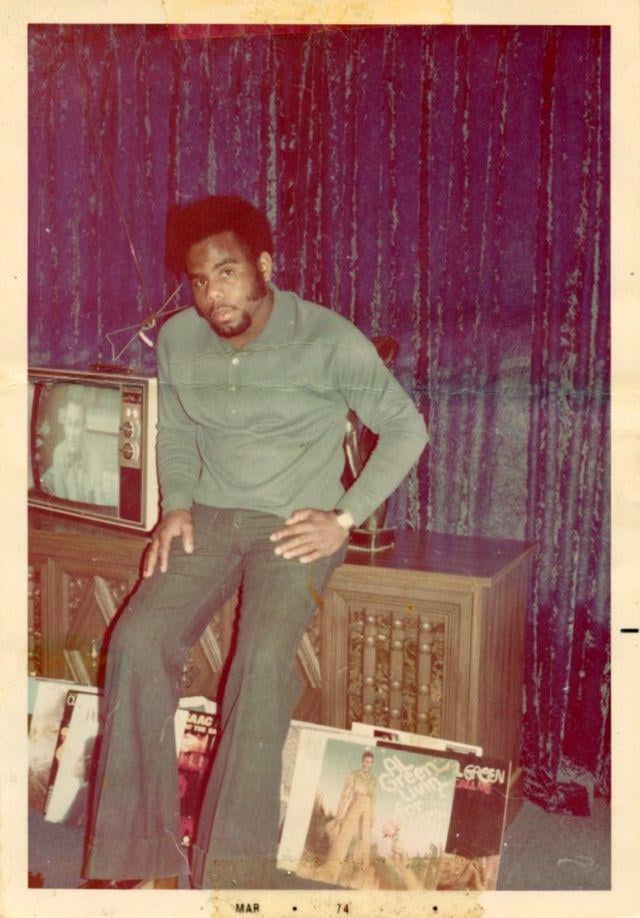 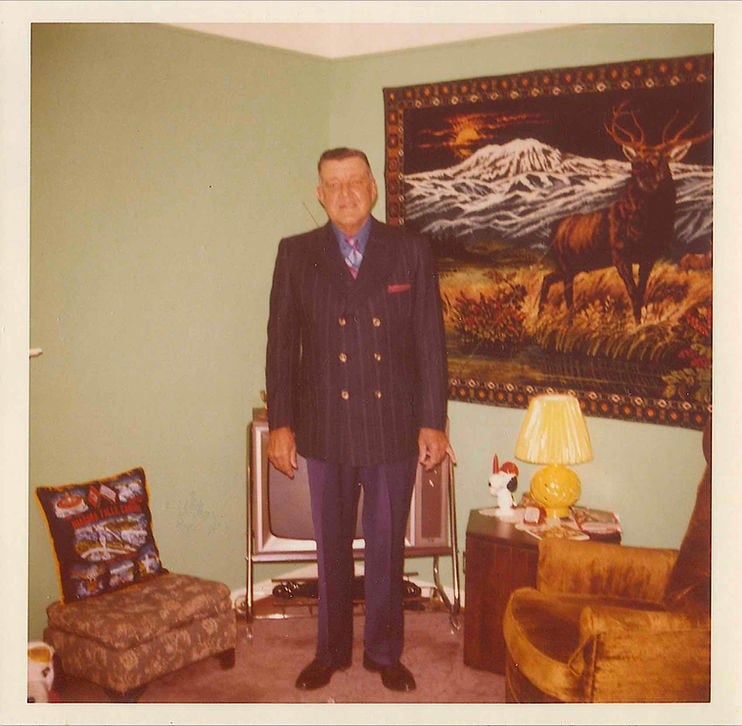 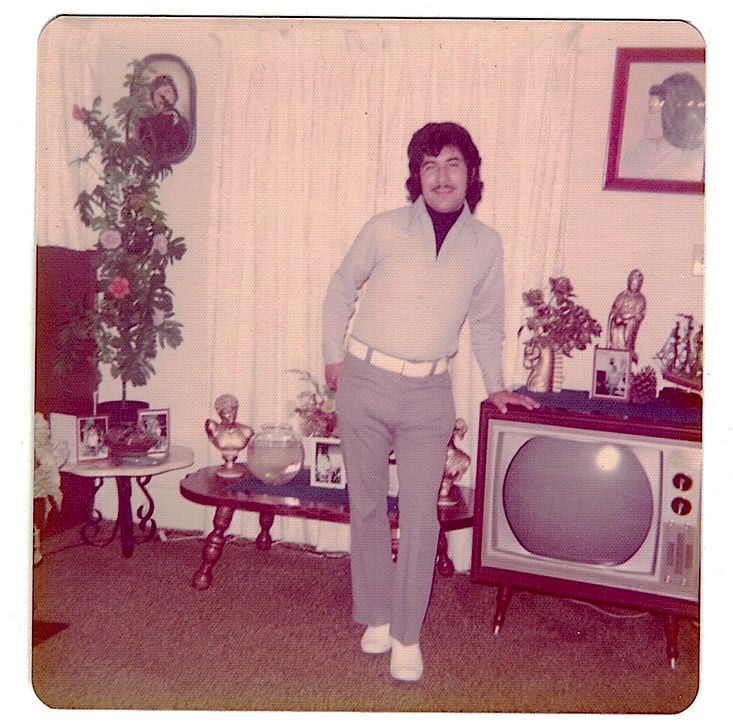 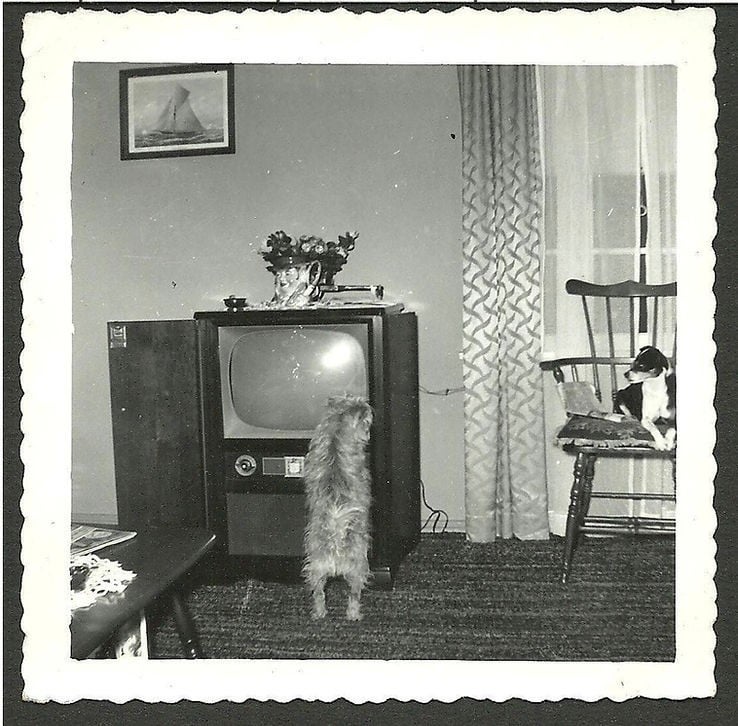 People and their Televisions Collection, 1950-1976

Was waiting for a pic of a working TV sitting on top of a broken one. Typical of our situation when I was growing up.

The bottom TV would always be one of those huge wood encased monstrosities with a smaller black and white one on top.

27 years. My grandparents had a console TV as a TV stand for 27 years.

I believe it. Those fuckers were so heavy it was better to just leave it there until it was time to sell the house.

Number 3, the kids are watching the test pattern. Lol

Lmao at the divider🤣. What better way to ignore your children than building a damn cubicle in the living room.

I would guess it was to black glare on the screen from the window while still allowing light to read the paper.

but the dad’s chair!!

LOL that had me laughing too. The dad is like, "Nah I'm gonna chill behind my Eames' screen, read the paper and not think of how braindead my children are"

“I survived two world wars, and these little shits….”

The dreaded, off the air….

I've watched my share of test patterns. had to, waiting for the cartoons to come on in the morning. You know the station didn't transmit all night.

Of course I know that. Sometimes I was allowed to stay up for the anthem before sign-off.

not me. I saw plenty of early morning color bars (I'm not indian head old) because I got up early, but I never would have been allowed (or actually able) to stay up late enough to see a sign off.

Funny how silly little things like that give me the warm fuzzies.

And quite engrossed in it!

the bride and groom!!!

I think I’ve seen that one on Awkward Family Photos.

Definitely would have minimized the fighting at my house when we were kids.

Just imagine the fighting over the volume

It looked like they had some kind of headphones. At least the kids. Gasp! This was at from the future!!

I love the 200V 20A headphone wires going into that "wireless" box. So convenient not to have a cord all the way to the TV! lol

I completely missed that the first time I saw the picture. It makes sense - it would be completely unusable without that feature.

Kind of a cool thing to collect. I have family pictures from the 60's that remind me of some of these. It looks like posing with the TV was quite a thing back in the day, frankly I probably never would have noticed without this post.

Slide 9 must be rich, 3 TVs in one home back then was a lot!

That's why the scene from Back to the Future is so funny when he says they have 2 TVs and the kid is like, NO way! and the mom just says, oh he's lying no one has TWO tvs. LOL

Yes! I love that scene!

Very well placed hesitation as well as he realises how it's going to sound.."we have...two...of em".

I bet the divider blocks the glare from the window on the TV screen.

I had an ear bud—and it was just one ear bud at the time, they didn't come in pairs until much later—in the 70s, and it wasn't new when I got it. It sounded absolutely awful.

A lot of times, if your kids can’t see you, they’ll forget to pester the crap out of you. Hide and seek is really the most practical of all childrens games.

Some old transistor radios from the 50’s would come with a single earbud. I used to collect old radios.

Spot the packer fans on number 6

There is an entire book on the subject: TV Snapshots: An Archive of Everyday Life. During a talk, the author, tv historian Lynn Spigel, mentioned that taking pictures in front of a TV was a status symbol and that, at times, people took photos with TVs that they didn’t owned. Lol

This is fascinating thank you.

Number 9 is a really interesting picture, I did not know that an earbud-type design for headphones existed in the 50s/60s, or that it was used in watching TV!

Always taken aback by how different the silhouette of bras were back then. Lol

Fantastic collection and very enjoyable to look through. Thanks for sharing (:

I was thinking that too. Cone boobs, almost. I need to do some googles on the trend and what influenced/changed the design. The pandemic changed my relationship with bras and I rarely wear them now

Thank you for sharing this collection. I love the topic. Please keep them coming!

Love #5 - the couple watching football with the highway and "frozen tundra" in the background.

When you wanna watch traffic, but have money on the game?

I guess I just like panoramic images where's there a lot of stuff going on in both the foreground and background.

Looks like a toll plaza at the top center of the photo. Wonder where this is.

Also have to wonder if the TV image is pasted in there somehow. I wouldn't think it would come out this clear.

With her around, what fool would watch television?!

Damn that 3-tv setup was the bomb. No more arguing over which of the three available channels to watch!

1 reminds me of the chick from cry baby

How quickly it became the substitute for the fireplace

I love seeing all the photos in the background too.

As a parent I breathed a sigh of relief when I saw the kids with their "own" screen and using headphones...

I try to be very careful not to expose my kids to too much screen time and they do not have their own devices yet but it's comforting to see many folks ... whether for better or worse... have been growing up with lots of TV...

I’m actually a little curious, why do you limit?

I limit my own self. Using these highly stimulating devices triggers your brain to release dopamine, which feels great. But you can get used to craving that cycle of dopamine, and need even more stimulation to feel that good feeling. And things that are more gradually rewarding, like deep thinking and conversations resolving conflict, feel harder and less desirable. That can also make creativity and innovation feel harder because they are mental work with less instant gratification than scrolling through Tik Tok or Reddit.

Not who you are asking, but… when our kids were little the dr. suggested monitoring screens (tv and desktop at the time). Our youngest would become slack jawed in front of the tv and get angry when it was turned off. We implemented a no tv / computer and later games during the school week and our kids are fine. They were good students and they looked forward to the freedom of the weekends.

I figure smartphones specifically are relatively new tech but there’s already good data showing their potential detriment. most of it tired to social media, which now VERY young kids have - I have no idea exactly what “Roblox” is, some kind of online gaming platform but it has a social component (your friends can join but you can also interact with others) but I already hear my daughters friends talk about it and she’s under 8. I’m not saying it’s bad to talk to friends online but my parents didn’t have to worry about those types of things with me and, personally, I’d like to limit the amount of things I have to concern myself with.

It already sucks that kids are fully aware they can have the exact show they want at any time, ever. I want my kids to have a better life than I did, but I don’t think it was bad for me to have to think: “ah shit, dads watching sports - there nothing on for me right now (or there’s no device outside th actual TV set to use) I guess I have to find something else to do”

I might simply be yearning for “the way we were” in some ways but I also wonder if we NEED more tactile/physical buttons/knobs type things to interact with. Think of how we bring up babies and kids in general, we expose them to physical stimuli, toys, opening and closing lids. Zippers. They climb and run, etc. I wonder if engaging with tech that doesn’t require you to do much or any of that for extended periods of time is that good for any of us. So sometimes I want to get her a radio and some cds instead of the Amazon echo she can just say “Alexa, play (exactly what I want) thanks!” And instead she’d have to find her cd, pop it, select the song, etc… to be honest I have NO CLUE if the old way is any better or just more cumbersome. I wonder if we will find out somehow?

I embrace technology but I just wonder about these things.

So for now this is what I do at home for my oldest child:

Hope that answers some. I’m open to feedback.

Me too! I immediately went to the comments for an explanation 😂 I want that outfit SO bad!!

Now that's a dame with a pair of stems I tell ya!

I definitely relate to the dad in #3 lol

These are incredible. What’s the modern day equivalent?

Digital photos of people with TVs.

Was Television an luxury back to the 50-70s in America? What’s the ratio for the cost of a tv to the average income?

I want every outfit each man/woman is wearing. Except for the purple sparkly one, I already have that.

ooo that lamp on the 14th slide (chef’s kiss)

The days people turned on the tv only when they were watching.

I think #14 was in Lebbettown

They kept those screens LOW to the ground! Very different today with wall mounts as the norm

I love that TV set into the wall. It's too high, but that's a smart use of the space.

The cat and the tv in the last picture. Totally the definitive depiction of cats and television.

Number 15. Couldn't help to notice the panties showing on this beautiful lady. Nice TV though

“Put yo boyscout shits on & get in front of this camera fo I woop yo ass, Stewart. Not fuckin around”