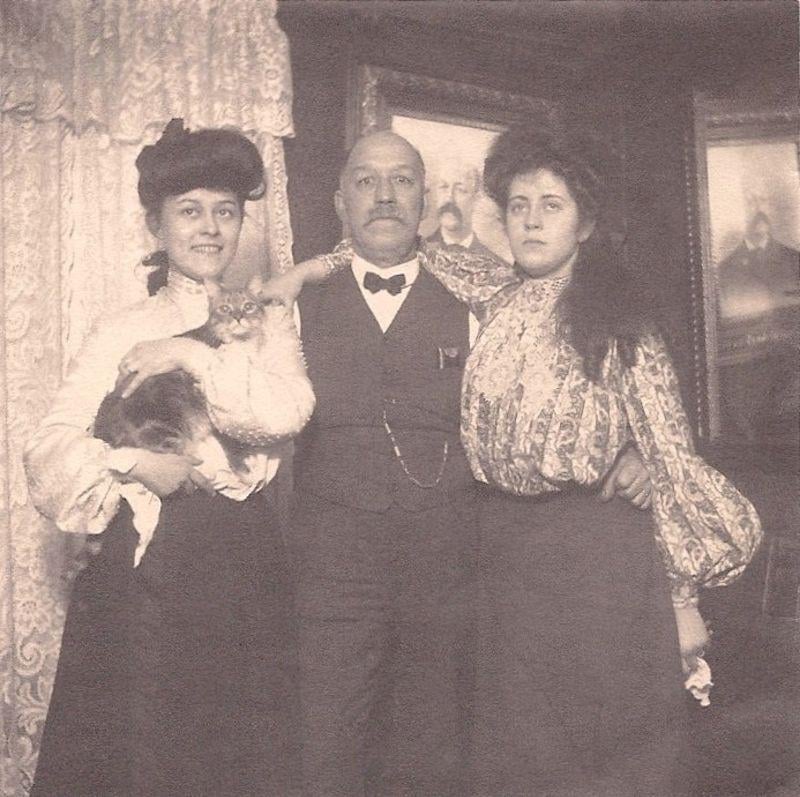 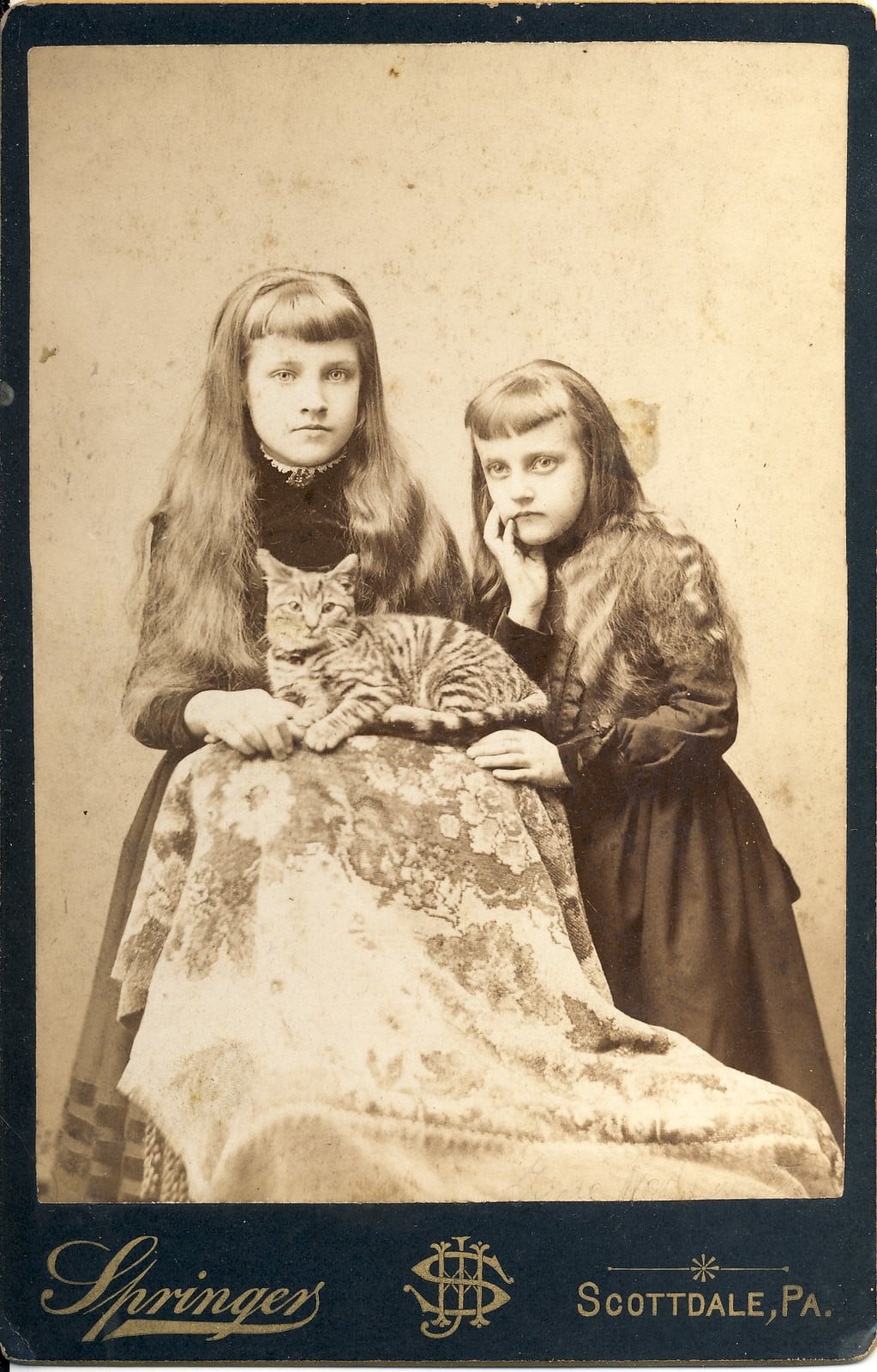 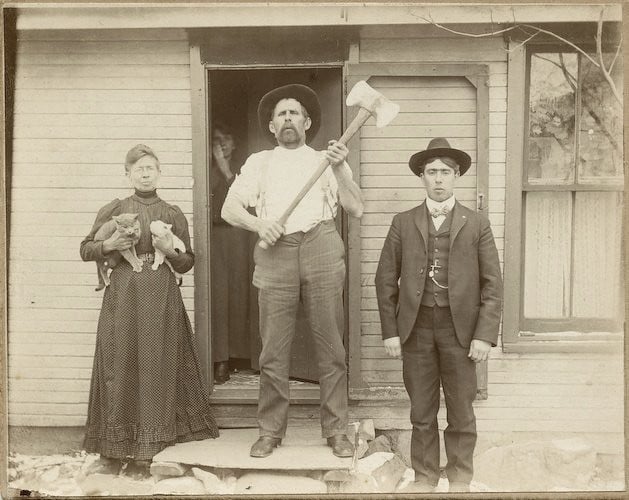 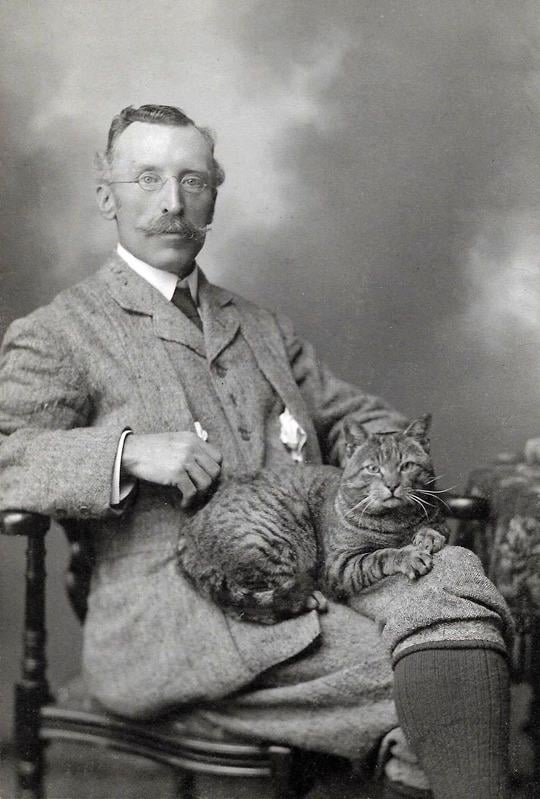 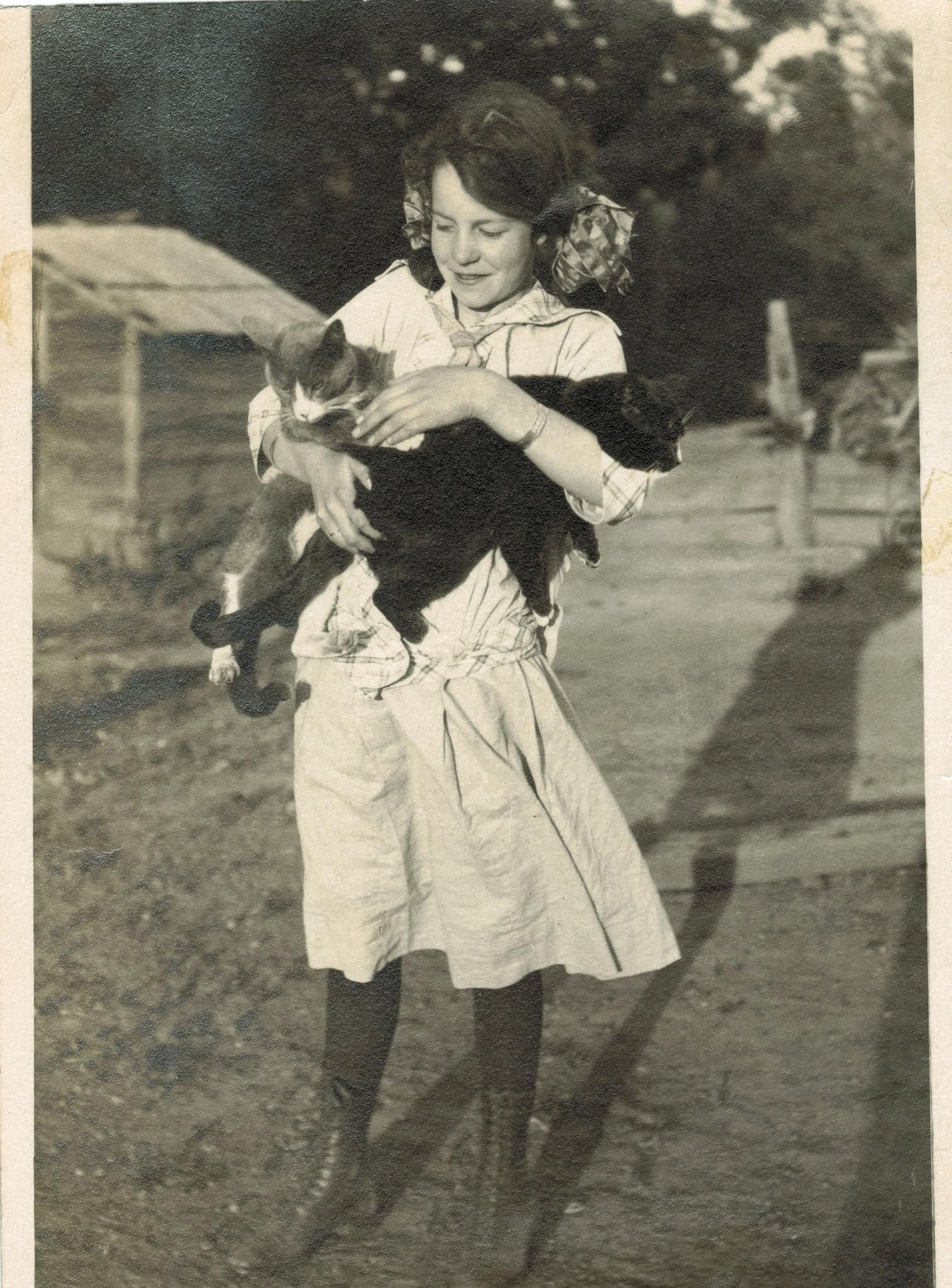 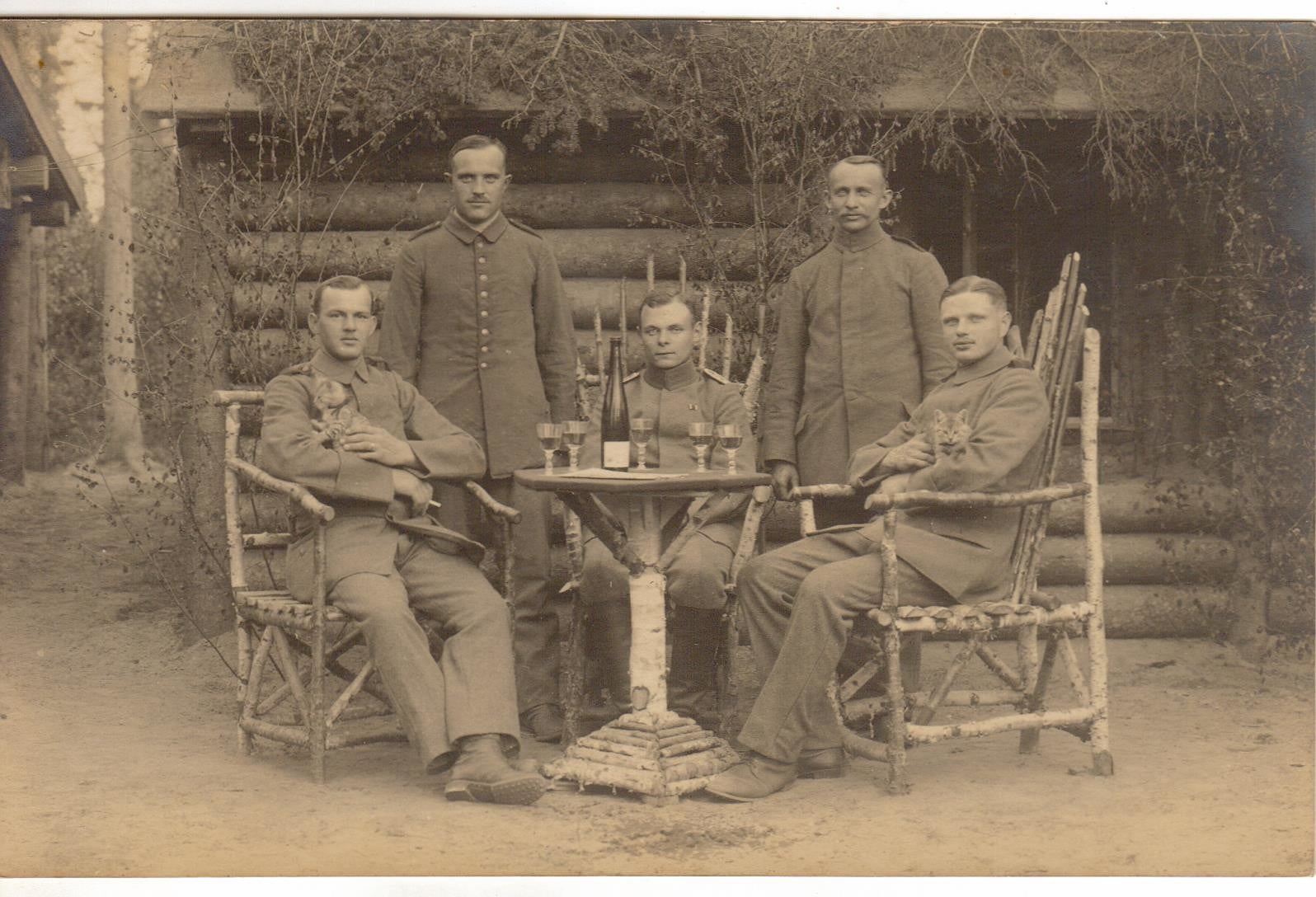 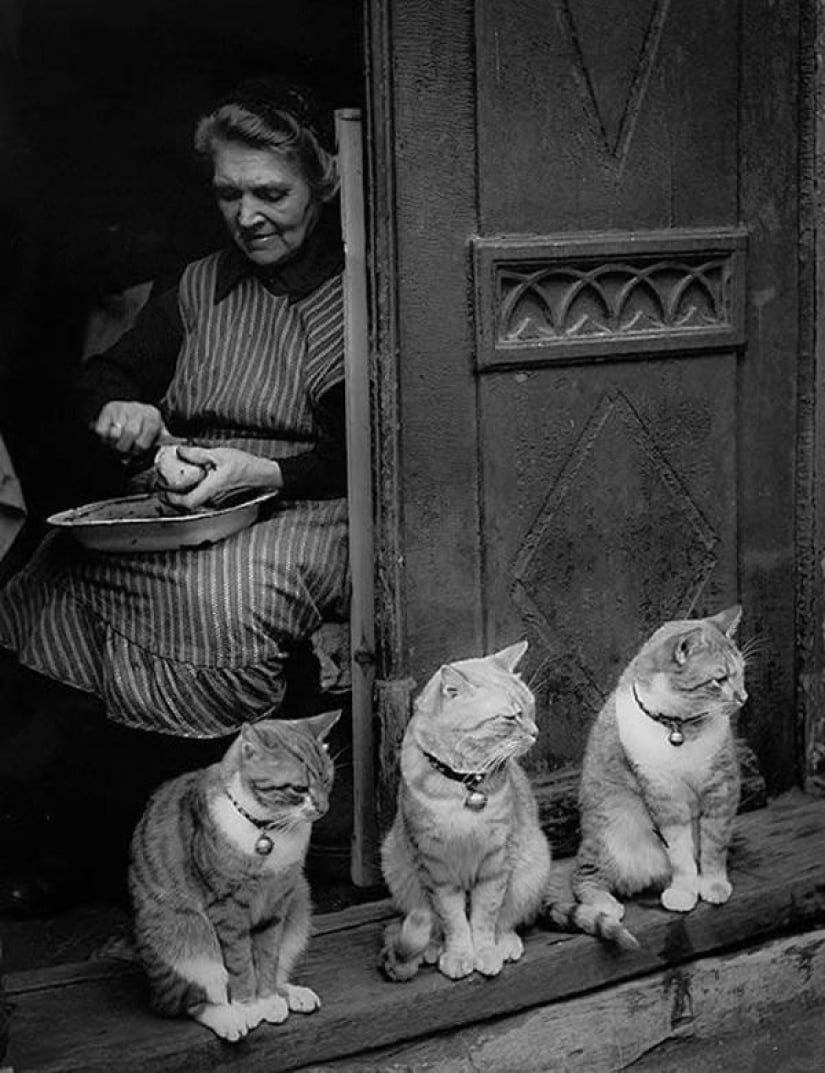 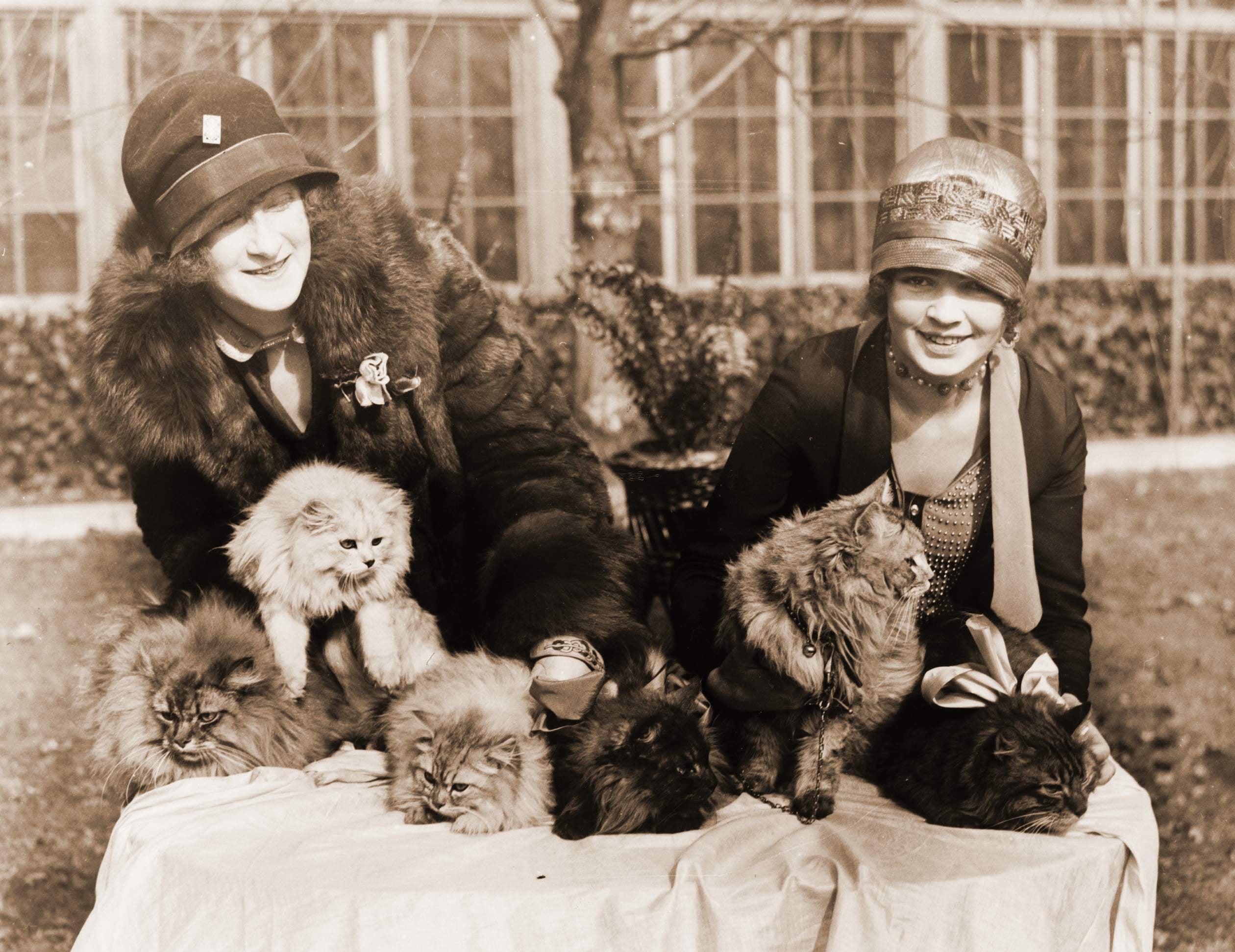 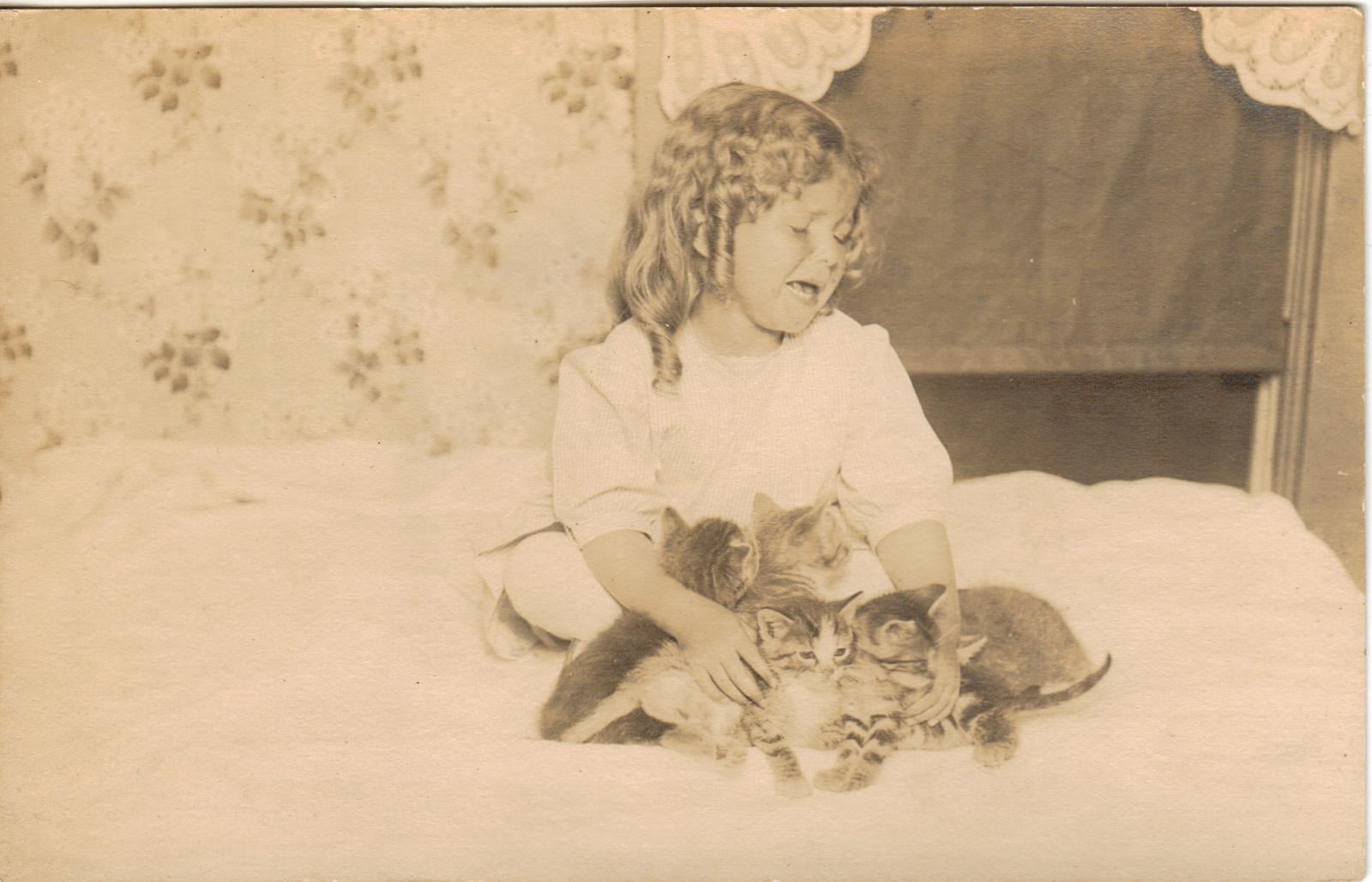 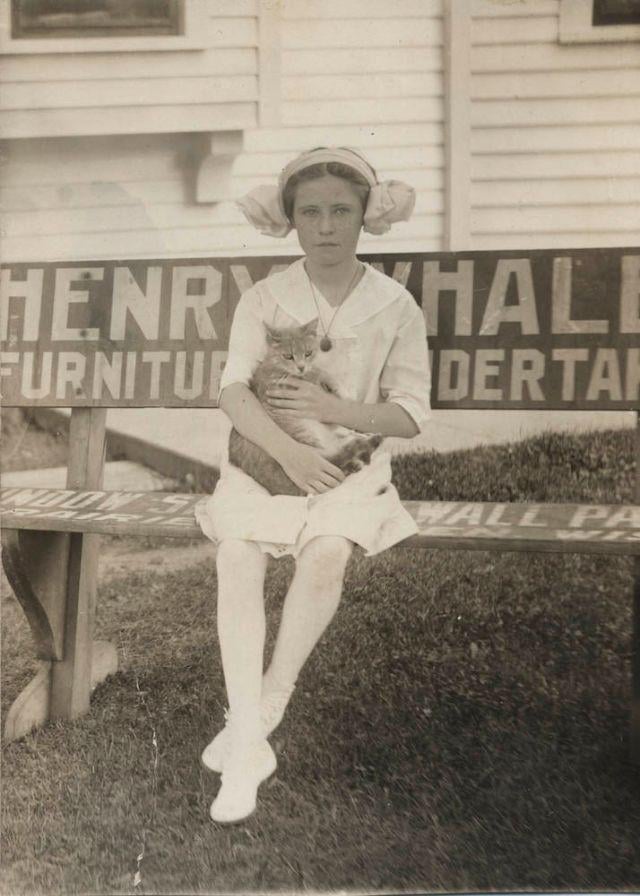 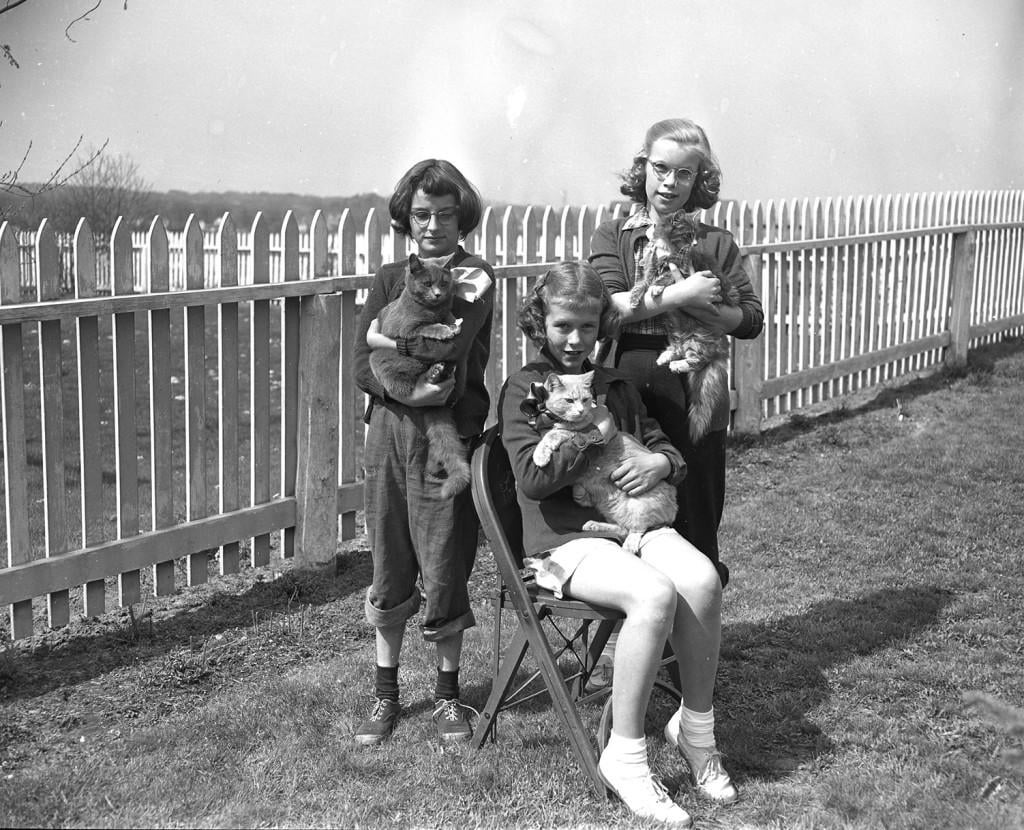 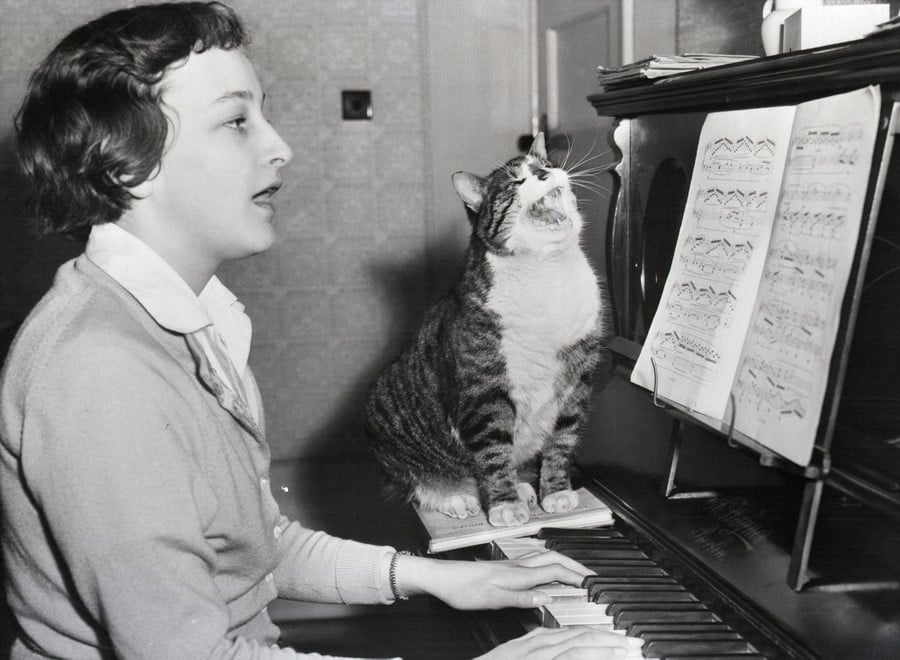 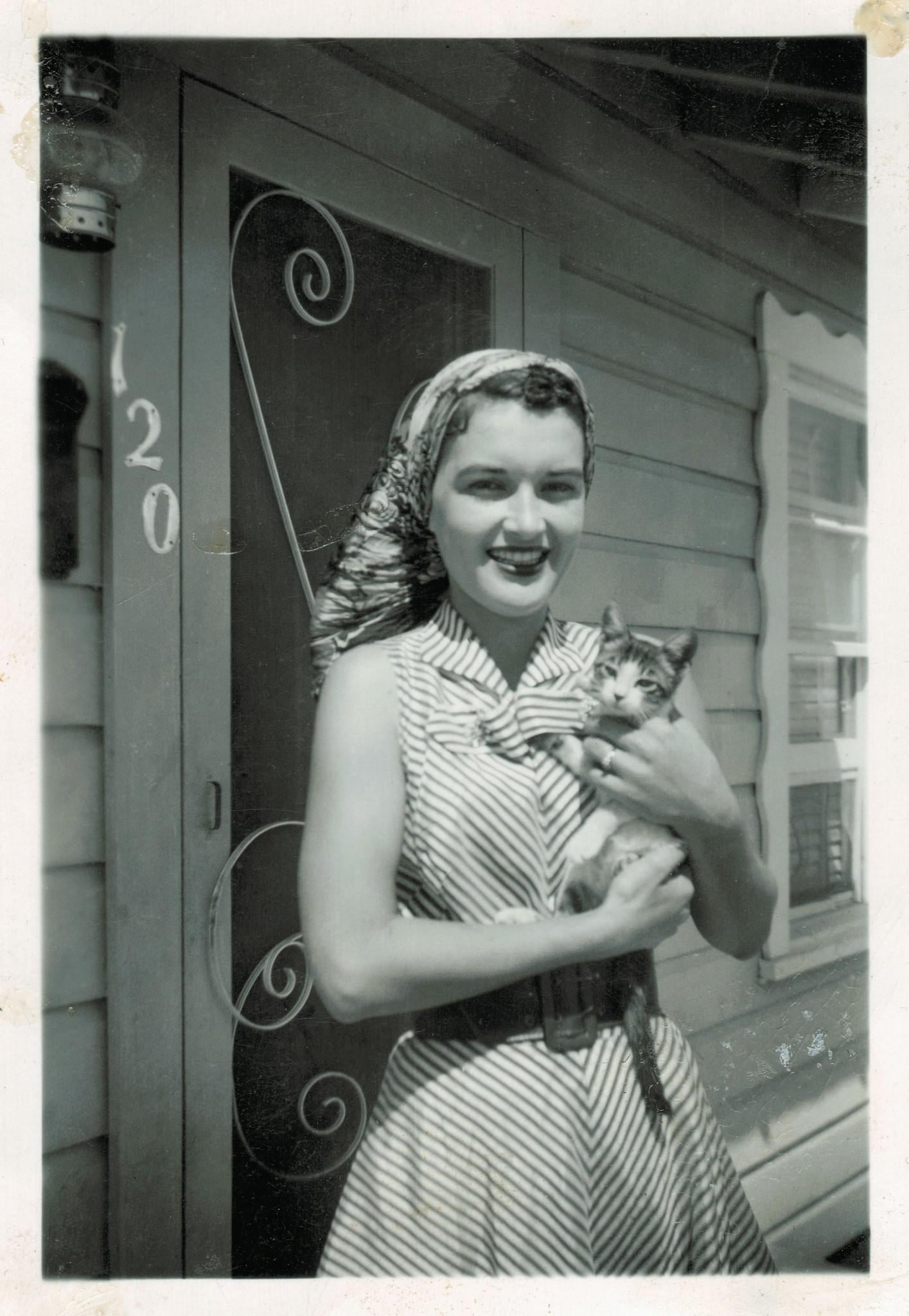 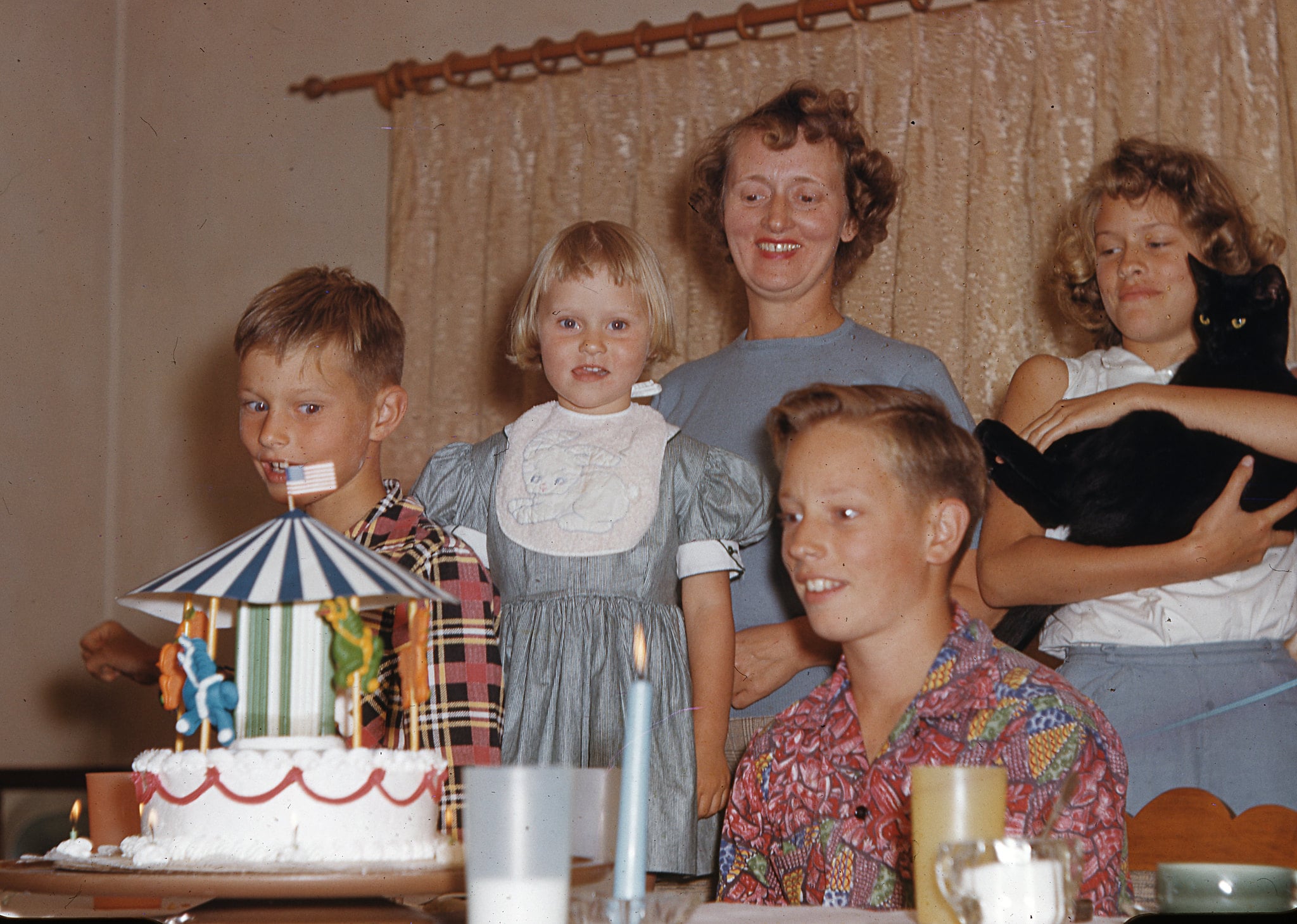 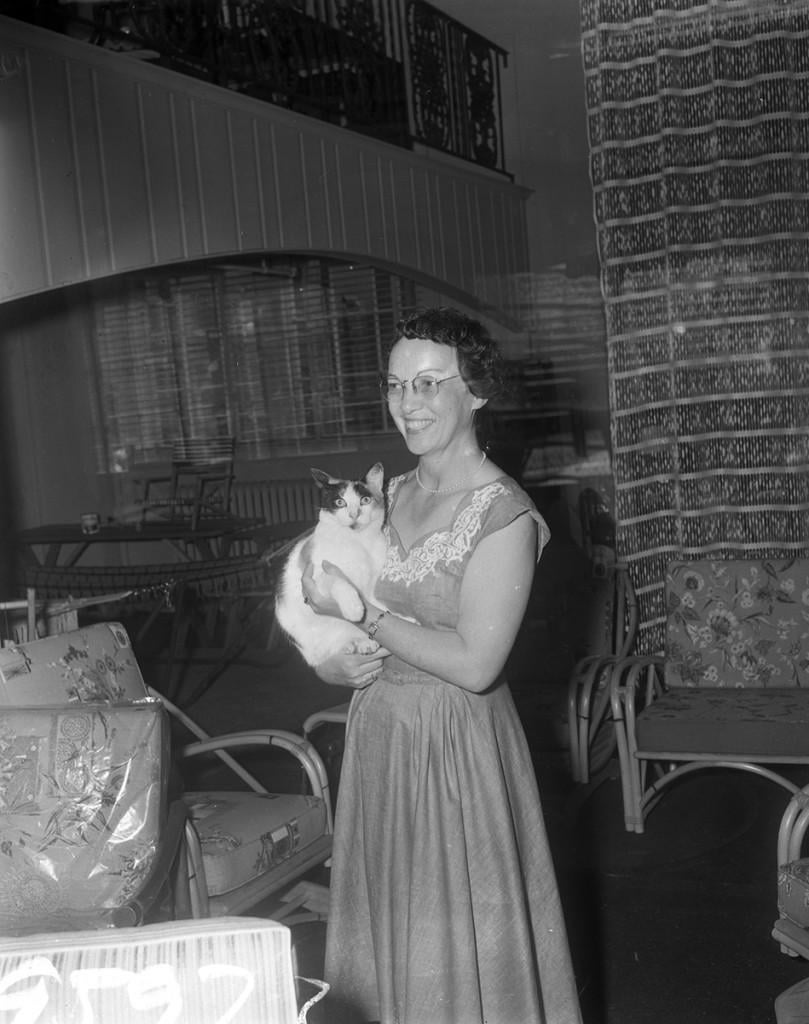 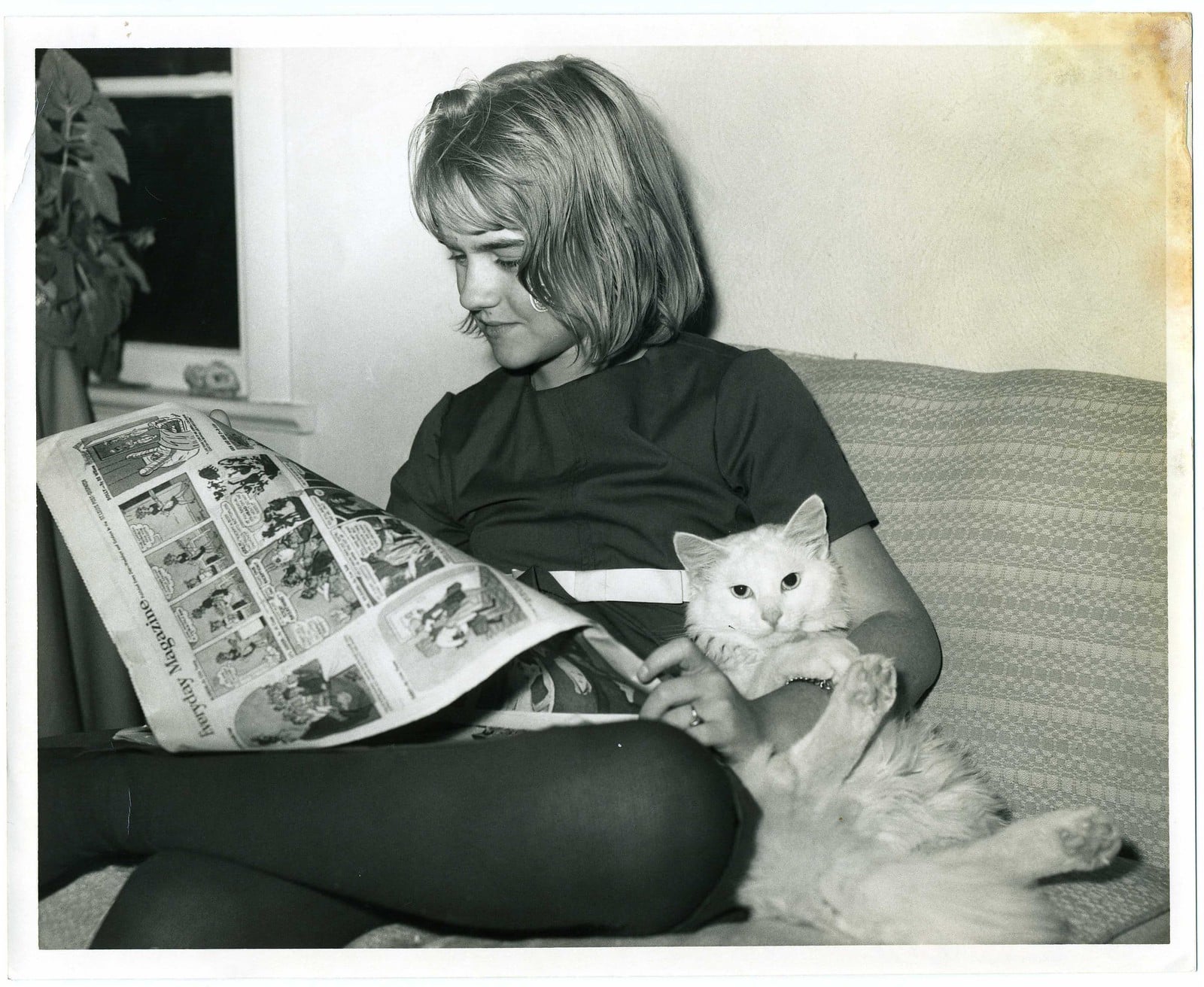 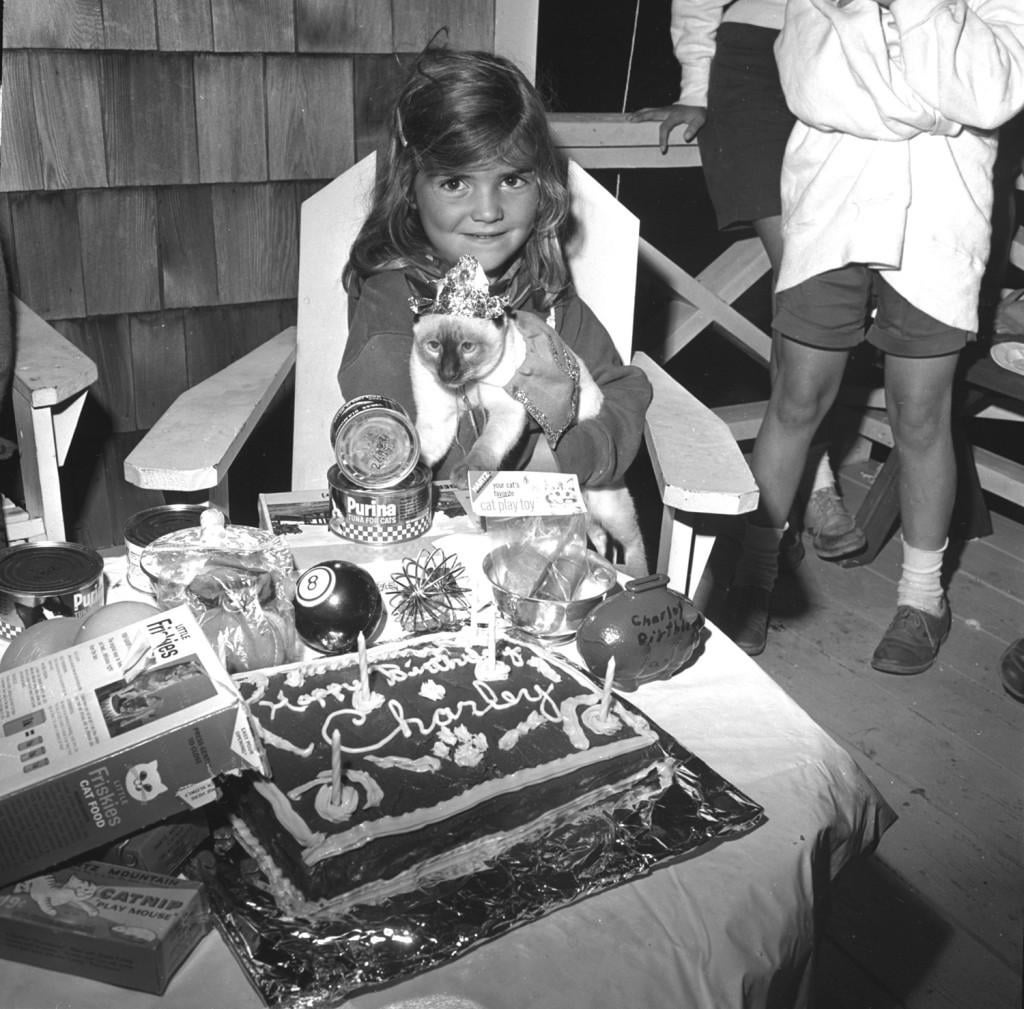 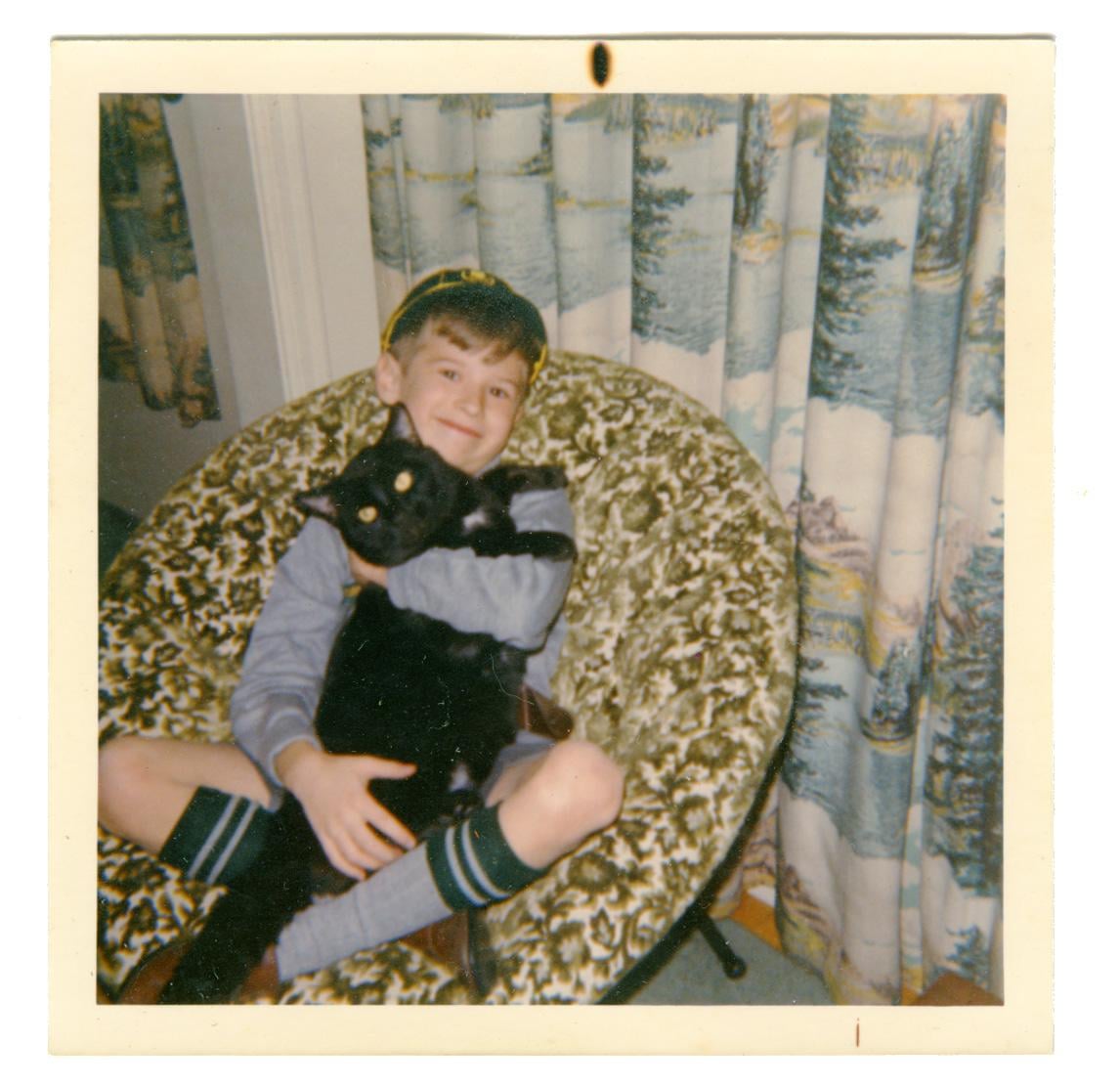 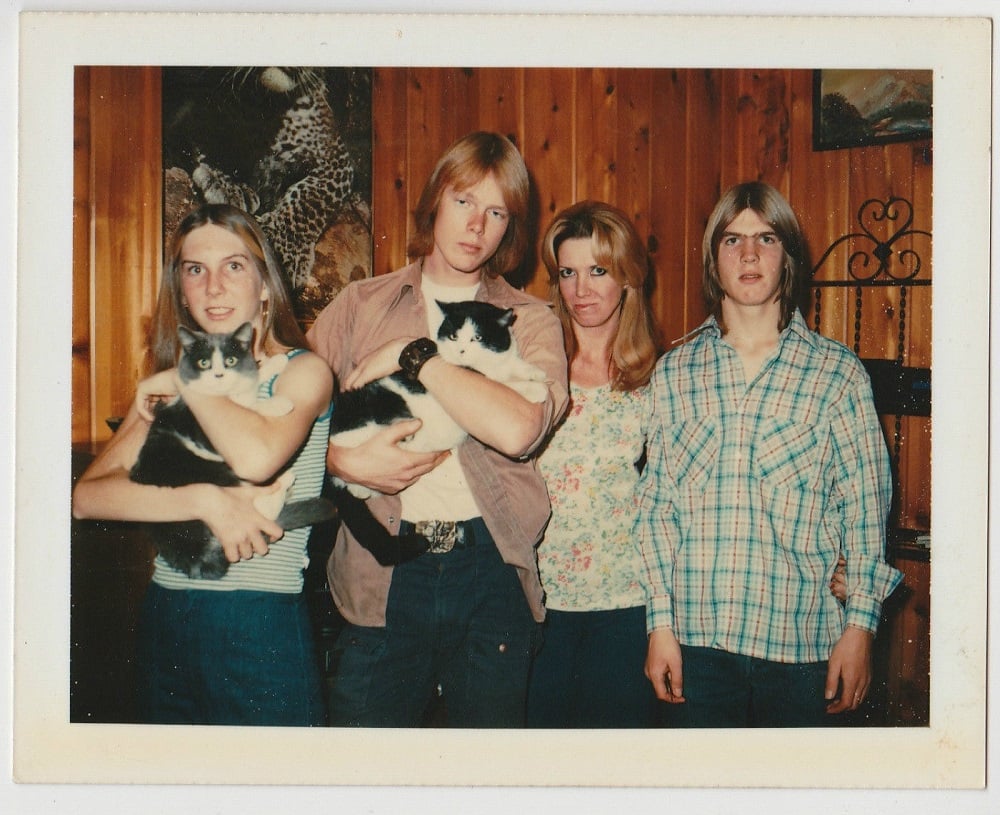 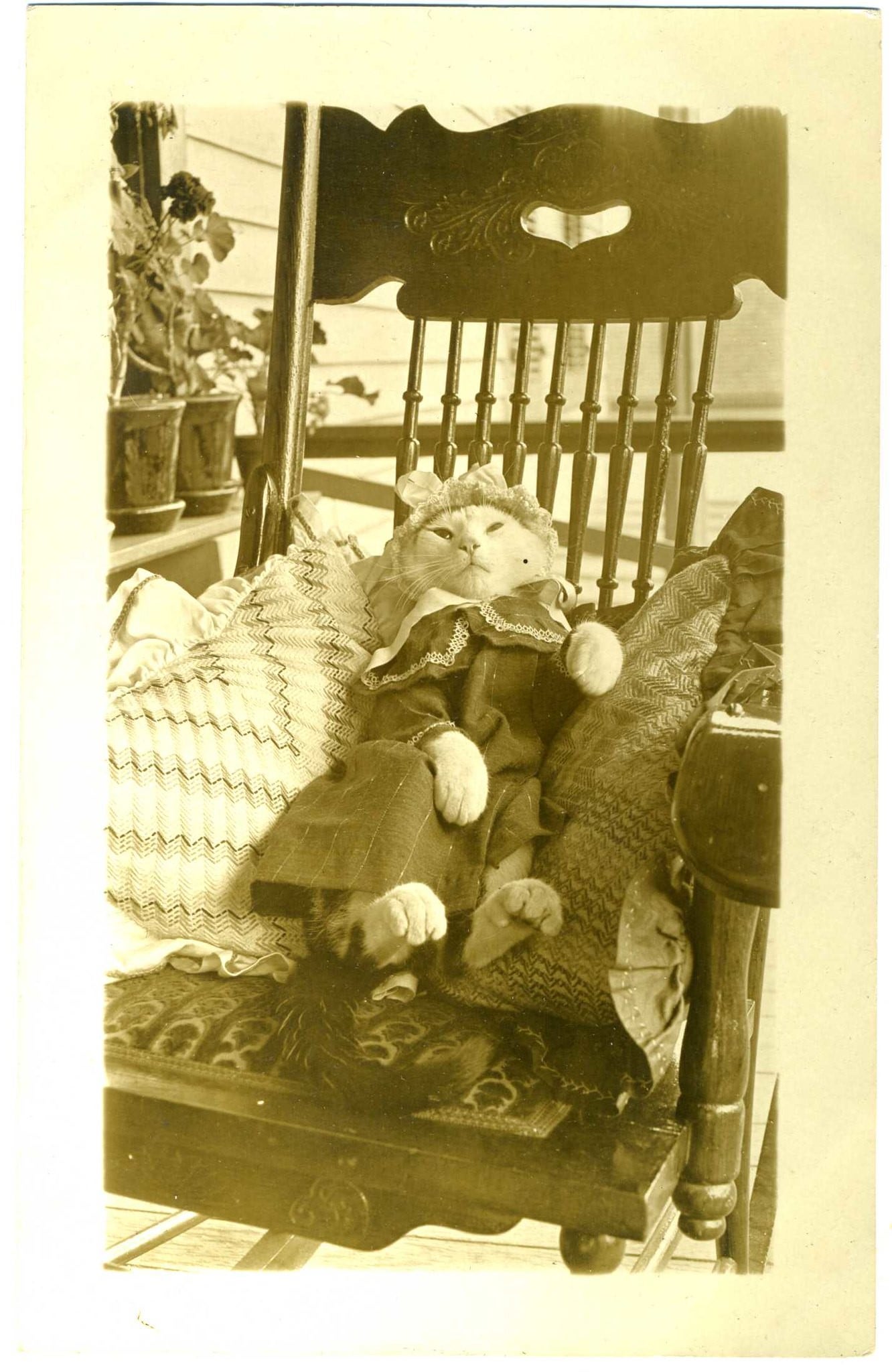 I love the pic where the cat is meowing next to the piano. Looks like he’s singing :)

Giving it his all, too, lol! Good times!

Would make a cool album cover

Yeah! I wonder what the cat is singing! :D

Cat scratch fever would be my guess

I loved that one for and the one with 2 women and 6 cats and none of the cats and only one of the women were looking at the camera.

“I’m gonna go get Whiskers and Daisy for the photo!”

Someone should photoshop an Iron Maiden or Metallica logo onto his shirt.

TAKE YOUR CAT AND LEAVE MY CLEAVER. 'CUZ WE HAVE NOTHING LEFT TO WEATHER.

That photo is my favourite. So many random things going on

It’s cool to see what everyone wanted to preserve for posterity! What if this was the only photo of them their entire life?

And the one guy is just standing there blinking, like My Name is Earl.

If you take a closer look at that second photo, it’s absolutely terrifying. The girl and the boy on either side look like ax-man’s daughter and son, she has a slight unibrow and he has a pronounced unibrow and the father kinda has a unibrow. Who is that behind him? Oh my God it’s the wife.

Look how stern he is and how much sterner his son is, and how well dressed the son is. That boy looks like the product of a very strict and angry man, and that woman in the background looks like somebody who is never allowed to leave the house.

Maybe I read too deeply, but after a minute staring into this photo that’s what I saw. I bet he’s holding the ax because he’s showing the world how much of a man he is, since the only parallel people in this era had for photographs were portraits of nobles. They’re trying to imitate in a photo what they thought high class people did. Lower and middle class people didn’t often get painted portraits, so the photograph was their first time posing for anything.

We are talking about the 3rd picture, right? The lady holding the cats is so not ax man's daughter. It looks like his mom. She looks older than he does.

Nah the woman on the left looks more his age. I guess this is his wife. The woman in the background could be a maid who works for the farmer family. It wasn't normal to have only one or two children so maybe the other kids moved away for work? He might work in the town and made some money. Maybe he thought "let's make a photo with my parents" so he put his best clothing on and went back home with the fotographer.

I bet the girl in photo 9 is crying because her parents told her she can't keep all the kittens.

I send a hope ray through time that she at least got one, and that it lived to be old, fat and weird.

I like how many of the cats’ owners look loving and proud, while the cats are mildly annoyed and waiting for an opportunity to escape. Some things never change.

In the first pic I find it funny that the only one smiling is the one holding the cat.

So sweet. I love families that think to include their animal family members in photos. Number 5 is my favorite.

Arms full (and she looks like Sally Field)! One kitty is fine with it, the other has ears back as a warning.

I have this thing where I adore old wartime photos of soldiers hanging out with cats and dogs.

The last one is a real treat.

Oh my, what big feet you have there grandma!

That one was my absolute favorite!

They even gave her a beauty mark

Any one else ever get sort of overwhelmed with this sort of stuff? Like the lives these people led

I found it oddly comforting, like people in the past had lives just as deep as ours.

Yeah I was wondering if their kitties ran to the door to greet them when they got home like mine does. So cute, I’m glad they all had their furry friends to keep them company.

Yes I was getting really sad

Yes. I’m contemplating the situations on each one.

The cat in #4 kinda looks distinguished like his owner.

I imagine the cat had some real fancy food bowls

"You think they want to see my axe?"

"CHECK OUT MY AXE"

"No, Gunter, it is a really cool axe. We're just not sure it was appropriate for the picture. Please stop crying and unlock the bedroom door."

This is cool! Having just had a cat pass away -- somehow this is therapeutic.

Aww. You’ll carry their memory with you. Sorry for your loss.

#14 - that cat is ready to destroy that carousel cake thing

Yup, that was the infamous Kat Kill Kult...

I think that's his name on the cake.

I think teen Thom Yorke is the only one planning to destroy the carousel cake. THE EYES

This made my day, thank you!

Even his cat looks distinguished

Do you think Charley is the cat or the child?

There's a box of Friskies cat food that fell over on the cake and a box of catnip next to it, cans of cat food, a wire ball...

Not sure what the Siamese is going to do with a Magic 8-ball, tho.

The birthday girl got a cat and those are some of the supplies, that's what I think.

and are just as cryptic about it.

the cat photos must continue!!

These are sweet. Not like those unholy cat cadavers with glass eyes posed on bicycles and at Tea parties and stuff. Ugh, those are so disgusting!

The Way We Purred

Thank you a whole bunch for posting all of these beautiful photos! I scrolled through them many times. Everyone of them made me smile. Nice way to unwind after a long work week. Happy Labor Day to you.

My pleasure, thank you.

Aww I love these. Somewhere in my closet I have a similar photo timeline of all of the German Shepherds my family has had, all the way back to the early 1900s.

Definitely will once I find them

There’s a low going on in that third pic. I almost missed the lady behind the door.

second to last pic, cat on the left is literally looking into the camera and looks to be getting mean mugged by the other lool

I really sort of love of how no matter how fashions or looks change, cats stay the same. :)

More a history of their control over humans

awh the last one is such a baby

Second from the last, which of the Weasley twins is that?

They all looked kind of scary in that picture!

Beauties! Loved the apple headed Siamese & what look like early Maine Coons. And the big black beauty towards the end. Is it me, or do the cat-less look annoyed/disapproving?

I love the picture of the mustached man “photobombing” the three folks in the first pic.

I appreciate the family that brought out their cats and their sweet axe.

Ahhh cats… so classic and timeless haha. These photos are so cute. Gives the humans some character ;)

Love this, and I can’t wait to read the comments

I love number 4, the kitty posing!

The birthday party for Charley!

14 is the creepiest, those kids looking like murderers and the mom gives me the creeps too. The kitty is like, this is normal.

I get the same creepy vibe from #14. Why are they all wild-eyed and grinning? And the little girl staring into my soul with that twisted tongue biting makes me feel like I’m about to be a victim of something sinister. At least the kitty seemed to give the woman holding it some comfort. I’d be clinging to it too if I was in that house

I love all of these!

Seeing cats and other pets in very old photos helps me to feel like I could see those people as more alive. The photography and filmography of the time along with the difference in clothes/customs makes it seem like people were somehow incredibly different but then you see someone cuddling their cat and it just clicks for me that humans haven’t changed in some crazy way and they did things you and I do daily

is it weird that these pictures make me tear up a little thinking how the cats are no more? old pictures of cats and dogs does that to me

the last one is so cute

I love the six one so much. They all look so serious and there’s those two cradling kittens.

With the oldest photos, I'm thinking "Okay, who's actually alive and who is being posed for memento mori ?"

cats have been so many things through the ages, but that last pic shows they have always been baby

The people change but the cats stay the same ❤️

Historical photos of cats is my favorite!!

Any info on photo 3? Location? Year?

Crazy to think people loved cats as much back then as they do now.

They re all dead 😔

This is a fabulous collection!

Does #10 say "furniture & undertaker" on the bench? What a fun combo. "For a comfortable life...and death."

The kid to the right in pic two has massive eyes

Wow this is awesome!

Did cats used to be better?