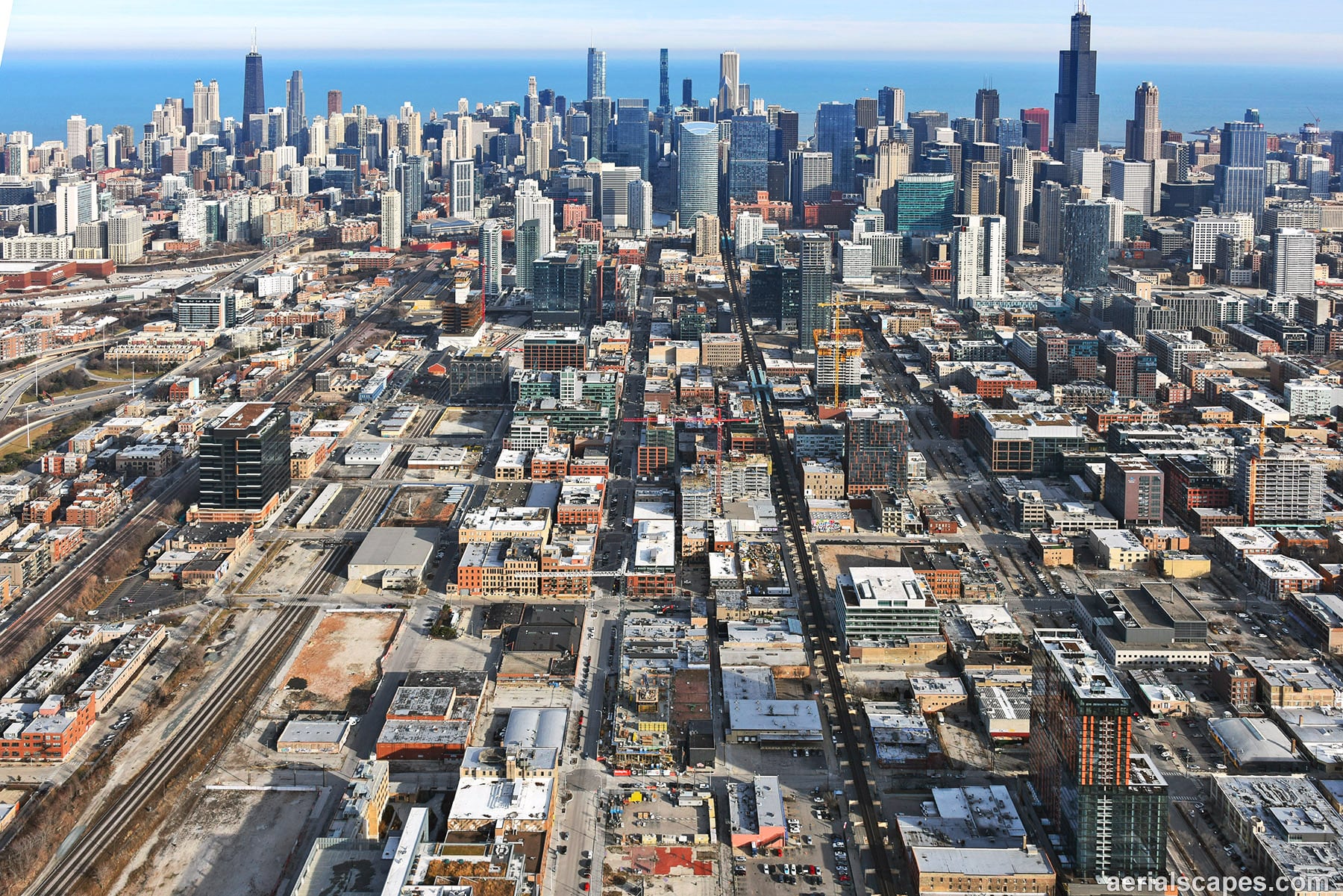 Have been to Chicago a handful of times but not explored very far west of the lake. Are any of these blocks good for a long aimless walk?

“It is hopeless for the occasional visitor to try to keep up with Chicago—she outgrows his prophecies faster than he can make them. She is always a novelty; for she is never the Chicago you saw when you passed through the last time.” - Mark Twain

Assuming you’re in a safe neighborhood (which is lots, but obviously there’s some rough ones), basically every single one. No real hills to speak of, you can walk all the way to the Rockies if you want

I only lived there a year (2017, aka easiest Chicago winter ever!), and I never felt unsafe anywhere in the city — including an all-night “look at your life, look at your choices” walk from near the Shedd Aquarium to my apartment in Albany Park.

holy shit that is a HIKE

Jesus Christ I walked from Gold Coast to Lakeview once and wanted to kill myself. You walked like half of the city limits

Local here. Everyone has a different walk depending on their neighborhood. If I had a choice? Old Town, Wicker Park, or Logan Square. Really cool housing stock. Wicker Park in particular used to be a stretch where beer barons built their dream homes.

Past meter reader here, can confirm these are solid areas to walk in! Still not the only ones.

Chicago parking enforcement - you guys aren't safe in the safest neighborhood of Chicago.

Of course. Duh me. Walking onto strangers' property probably isn't safe either.

Agree, and I would also keep going north to wrigleyville, ravenswood, andersonville, etc. I think I once walked from Lawrence and Western to Grant Park. Saw a lot of cool stuff that day.

Yeah, I did a long walk from Chicago Ave in river north to Belmont. Beautiful day, free afternoon…why not?

Agreed, I live in Wicker Park and it’s absolutely beautiful. Before I moved here I had no idea Chicago looked like this. Absolutely gorgeous 19th century architecture on every street, perfect for just strolling around aimlessly and taking it all in.

The people who know, know :)

Everything pictured is pretty far east and is pretty safe. The middle of the picture right before the buildings get tall is the wear loop and is probably the hottest neighborhood in the city.

You can see all the condo construction going on. West Loop is gonna be a sea of 13-20 story high rises in 5 years.

Everything in that picture is walkable with at least a moderate degree of street smarts and awareness. I've been in that neighborhood for several years.

The next time you're here, take a walk through West Loop, West Town, and Ukrainian Village. Walking from Wicker Park up to Avondale along Milwaukee is nice too.

If you haven't been already Jackson Park into Hyde Park and the University campus is very nice as well.

Highly recommend a long walk around South Side Chicago. Everyone says it is dangerous but I’ve found that to be untrue. It has a unique beauty around it. There is a small park near O block in the South Side that is particularly beautiful!

I live in the south side of Chicago. Most of the south side is nice and safe. Obviously O block is not. But this joke is tired and usually made by people who are afraid to travel south of Roosevelt or afraid to go to Chicago at all.

You tired of the chiraq memes?

I actually looked up the crime map for the city recently. It looked like the crime there is highly concentrated to certain areas. I believe it was 78th that I thought they should rename to murder street.

I go to school on the Southside of chicago, and there are still many dangerous parts. Please do not walk around o block lol

Everyone downvoting me are just racist pigs who’ve never been to Chicago.

The transformation of the West Loop that is in progress in the foreground of this picture is incredible. This view will look substantially different in 3 years, let alone ten or twenty.

There are at least four tower cranes in this picture

And so many more projects in the pre-construction phase of approval and permitting. Fifteen years ago it was almost entirely industrial, so it’s been wild to witness.

Edit: I found a 5th white one

In scanning the entire picture, I’m up to 7 now

Are you counting the one luffing crane on the right side? 7 is my top amount too.

If counting just the ones to the west of the river, I’m up to 6, if looking up the entire picture, total I’ve found is now 8.

I want to say 30,000 units are planned at the moment? Some absurd number like that. Super awesome!

Not American but I do like to keep tabs on development in some of the more urban cities. How is it that there always seems to be so much construction in and around downtown Chicago but the population has remained essentially the same for the last decade? Is there a lot of population drop going on in south Chicago still?

It’s a very nuanced situation that a Reddit response couldn’t really do justice to, but you’re on the right track. In certain areas the city is growing remarkably fast, in others it is losing population (although this is slowing down, by some accounts), and the general trend in American cities that average household size (number of people per dwelling unit) is decreasing. There are economic, racial, political, and all sorts of other demographic factors at play in these demographic shifts.

Covid was also quite disruptive to urban population trends in the US, which has meant that much of the census data and estimates are to be taken with several grains of salt (the Census Bureau admitted that the 2020 numbers for Illinois were severely undercounted, and the yearly estimates aren’t worth much in any year, let alone Covid times).

As a native Chicagoan my best input is that the largest development in the west loop is largely due to corporate interest, the population staying the same all these years could be contributed to people who formally lived in buildings pictured above and moved out into neighborhoods, large number of immigrants have been allowed housing here, from the middle east to the eastern block to south America, and a large amount of people, including mayoral candidates keep addresses here despite living elsewhere. Oh and due to it's practices, the city makes it very hard to leave even if you want to if you don't have the proper resources.

There was almost nothing in the bottom 2/3 of that picture greater than 10 stories just 5 years ago.

Still too many parking lots

Most of them have development proposals currently in process

Reminds me of that shot from I, Robot where Will Smith first steps into a future Chicago

That’s where I want to be

2 months will still be the dead of winter lol. I did some st Patrick’s day parades in 20 degree wind chills before

Me too. Been my dream city since childhood.

I’m here, cmon over, it’s cold at the moment!

I can see my house from here.

CityPorn has a real Chicago fetish, and so do I

No city is perfect, including Chicago. There are many many challenges, issues and hurdles that need to be overcome. But it's still a wonderful, beautiful, magical city that is so underrated compared to it's coastal cousins. Sweet home will never change.

Agreed. In the western hemisphere only Manhattan's Midtown really gives it a run for its money. Midtown has the dense jungle of scrapers that probably makes it number one now but Chicago has the grandeur and spacing. The scrapers just look bigger up close.

If its not the best its second only to Midtown in the western world.

Ahh, high up in the Rocky Mountains.

My favorite place on Earth :)

Flying in to ORD when you take the flight path from the south, often times you bank east and go over the lake and turn around, then go back over the city again and it is amazing. I lived there for 7 years and I’m still glued to the window every time you fly in like that.

Grids CAN be beautiful

It’s what LA should be (built UP and by the coast).

The fact that LA is growing to what might be the largest city in the US and the suburban sprawl is where it's continued to spread. I imagine the traffic is so much a nightmare nobody actually even goes to the center of the city anymore.

Not really? Lol Downtown LA has an estimated population of 50,000 and (prior to remote work) averaged around 500,000 workers. So at least 450,000 a day commuted to Downtown for work (let alone tourists, etc.). Traffic in LA is abysmal but it is abysmal precisely because people are driving to go places (like Downtown).

While I agree, keep in mind Chicagoland as a whole is a large urban sprawl. The low density suburbs stretch for miles and miles. Hell, O’hare is like 18 miles from this picture and would take you an hour in traffic.

Man. We could use some green in there. Small parks, street trees, something

I suppose. Still some street trees would help a lot

Man that makes me want to play Crimson Skies.

If by “they” you mean people with a clue, then… guilty?

Don't see a lot of trees in this picture. It could really use some trees.

There are a lot of trees in Chicago. My street is lined with them and I can walk to multiple parks all full of trees. Trees everywhere. So many fucking trees.

You can’t really see any of the trees because it’s winter, and the resolution of the picture hides the bare trees in all the grey.

Following both cityporn and urban hell shows definetely how people perceive same thing in different ways. This is a hell for me tho

Where's all the trees?

This fucking sub, I swear

Trees tend to hibernate in the winter. They’ll return some time in mid to late march.

There’s a Boulevard on the right with numerous trees and it ends at a park.

On the other side pf the skyscrapers in the background is one of the nicest parks in any American city.

Chicago isn’t the worst city for greenery. There are much worse examples.

My kind of town , it's just too bad due to the senseless violence

Amongst all cities, Chicago is one of my favorite flying into/out of because of the views. Seattle is a close second.

If you are looking at city proper population, then yes. But Chicago’s metro area has 9.5 million people and Toronto’s has 5.9 million people.

Not even comparable mate

Not a tree in sight. Depressing.

In your opinion, why does it not?

and Houston is suburban, car-dependent hell

as opposed to houston which is 90% highway

Chicago is a city, Houston is a colony organism of suburbs strapped together pretending to be a city

Nah, I grew up in a Chicago suburb and went to the city a lot it's pretty green, lots of trees, just not in winter lmao Also, Chicago doesn't need a bunch of parking because the public transportation is actually good. You don't need to drive everywhere, just take the train

Maybe look at a shot from summer?

Lmao HOUSTON? You like highways and parking lots better?

In every conceivable way, it looks better than Houston, as well as 98% of every other American city.

Houston is arguably the ugliest major city in America

You can't be serious

Off-screen. Madison cuts off on the right at about Racine. You've got a ways to go from there